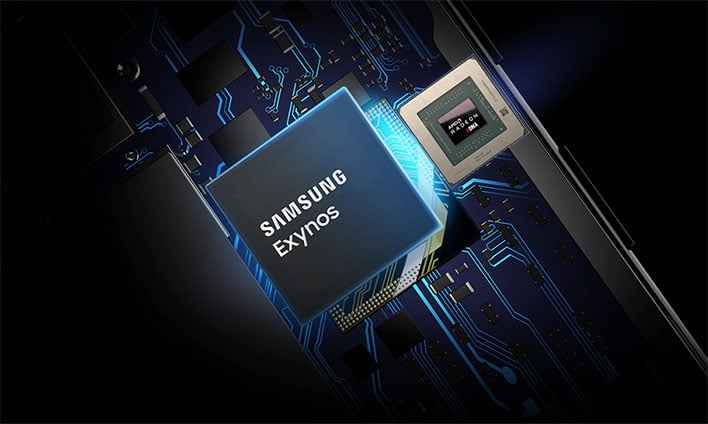 It was nearly a year ago when AMD and Samsung announced a multi-year partnership, in which AMD would license its graphics IP to Samsung to use in its mobile chips. At the time, Samsung promised "disruptive changes in technology" as it looked to take "future mobile computing to the next level." Perhaps making good on that promise, a set of supposed leaked benchmarks indicate Samsung might very well be on its promised path.
For AMD, this partnership is about expanding its Radeon DNA (RDNA) graphics architecture into the mobile segment.
"Adoption of our Radeon graphics technologies across the PC, game console, cloud and HPC markets has grown significantly and we are thrilled to now partner with industry leader Samsung to accelerate graphics innovation in the mobile market," said Dr. Lisa Su, AMD president and CEO, said at the time. "This strategic partnership will extend the reach of our high-performance Radeon graphics into the mobile market, significantly expanding the Radeon user base and development ecosystem."
Now almost a year later, a user on a Korean language forum claims to have some performance figures for a Samsung Exynos SoC rocking RDNA graphics. According to the user, Samsung and AMD are shooting to match or exceed the performance of Apple's next-generation A14 Bionic chip.
Here's as look at where things currently stand, according to the leaked benches...
To put those scores into perspective, here's a database entry for Samsung's Galaxy S20 Ultra 5G with a Qualcomm Snapdragon 865 processor sporting an Adreno 650 GPU...
Of course, the nature of leaks is that they are inherently unreliable, so we'll take this with a grain of salt. Case in point—BGR, which spotted Twitter post linking to the leak, notes the "Adreno 650 GPU scored 123 frames in the offscreen Manhattan benchmark," along with "20 frames in the Aztec benchmark at High settings and 53 frames in Aztech Normal." We're not sure where those numbers are coming from, because they're different than the ones above.
Either way, the leak suggests the RDNA graphics in Samsung's upcoming mobile chip absolutely decimate the Adreno 650 GPU, regardless of which set of numbers we're looking at. Who knows if any of this is accurate, though it stands to reason that infusing RDNA graphics into a mobile chip would result in a sizeable performance bump. So, we're cautiously optimistic.

Here's hoping we see some actual silicon based this partnership soon.