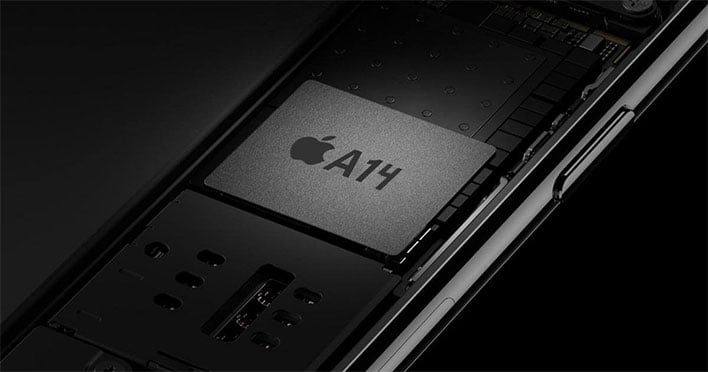 The custom chip that ends up in the next round of iPhone models could be one of the fastest-clocked ARM-based processors to date. That's according to a new report, which points to a leaked benchmark entry for what is presumed to be an Apple A14 system-on-chip (SoC) clocked at 3.1GHz. If true, it will be the quite the peppy processor.
For reference, Apple's hexa-core A13 Bionic processor is built on a 7-nanometer manufacturing process and runs at up to 2.65GHz. It is found in the iPhone 11, iPhone 11 Pro, and iPhone 11 Pro. Sitting below that is the A12X, an octa-core processor found in some of Apple's iPad models, with a max CPU clockspeed of 2.49GHz.
If the information about the A14 is accurate, then it will be 400MHz faster than the A13, which makes for a nice upgrade. Whether it is actually accurate, though, is hard to tell. The folks at Research Snipers are citing a Geekbench 5 entry that was supposedly spotted by Ice Universe, a prominent leaker with a good track record.
I have not been able to find the actual source tweet or the Geekbench 5 listing, but Apple Insider managed to grab a couple of screenshots comparing the A14 and A12X. Here's a look...

The A14 is shown scoring 1,658 in the single-core test and 4,612 in the multi-core test. I've noticed a few sites 'borrowing' one of our older Geekbench 5 graphs for comparison (RS included), but we have a newer one to share, from our recent review of Samsung's Galaxy S20 Ultra. Here's a look... 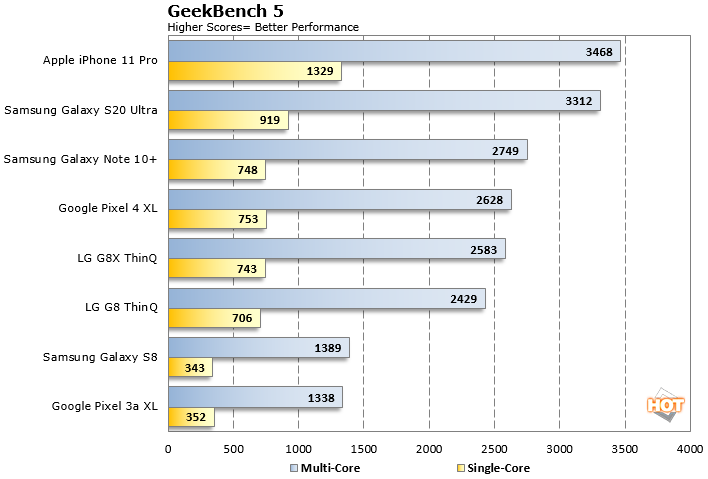 The leaked A14 score trounces the pack, including both the iPhone 11 Pro and Galaxy S20 Ultra. In the multi-core test, it is more than 39 percent faster compared the Galaxy S20 Ultra, and 80 percent faster in the single-core test. That's nothing to sneeze at.
Compared to the iPhone 11 Pro, the A14's multi-core and single-core scores are around 33 percent and 25 percent faster, respectively.
There's too much mystery here for us to put much stock in the leaked benchmark run. However, it's worth noting that Apple's custom processors have typically been strong performers, with enticing gains from one generation to the next. So, the scores (and what they implicate) are at least plausible.
Past rumors suggest the A14 could be built on a 5nm node. That could help explain how Apple is able to aggressively pump the clockspeed. As always, though, we'll have to wait and see.