Samsung is keeping its foot firmly pressed on the gas pedal by entering into mass production of its third-generation 16-gigabit (Gb) LPDDR5 memory chips for mobile devices, like its upcoming Galaxy S21 handset. Leveraging its most advanced process node (dubbed 1z), this is the first version of 16Gb LPDDR5 to be mass produced using extreme ultraviolet (EUV) lithography.
"The 1z-based 16Gb LPDDR5 elevates the industry to a new threshold, overcoming a major developmental hurdle in DRAM scaling at advanced nodes," said Jung-bae Lee, executive vice president of DRAM Product and Technology at Samsung Electronics. "We will continue to expand our premium DRAM lineup and exceed customer demands, as we lead in growing the overall memory market."
Samsung had already been mass producing 16Gb LPDDR5 memory chips, but the transition to a more advanced node means faster performance and potentially higher capacities, for the next generation of smartphones featuring 5G connectivity and artificial intelligence capabilities.
According to Samsung, its 16Gb LPDDR5 is around 16 percent faster than 12Gb LPDDR5, with speeds of 6,400 megabits per second (versus 5,500Mb/s). When slotted into a 16 gigabyte (GB) package, Samsung says its latest generation memory can transfer 10 Full HD movies at 5GB a pop, or 51.2GB of data, in just one second.
The other advantage Samsung is touting has to do with size. Samsung's commercial 1z process produces LPDDR5 packages that are 30 percent thinner than the previous generation, enabling even slimmer smartphone designs, and increasingly svelte folding form factors.
"The 16Gb LPDDR5 can build a 16GB package with only eight chips, whereas its 1y-based predecessor requires 12 chips (eight 12Gb chips and four 8Gb chips) to provide the same capacity," Samsung says. 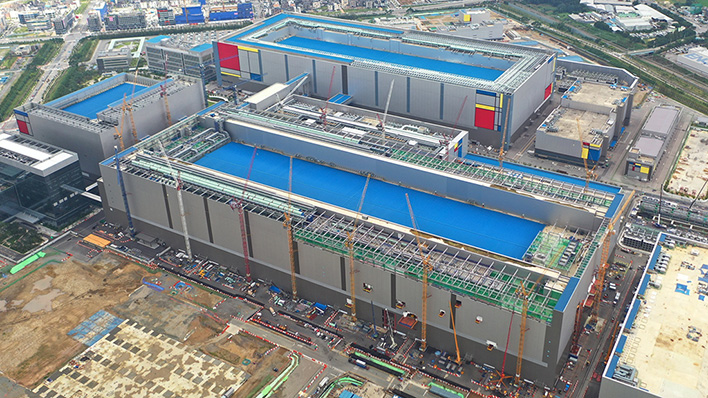 Samsung's new memory chips are being produced in a second production line in Pyeongtaek, Korea. The facility spans over 1.3 million square feet (about 16 soccer fields, for reference), with the LPDDR5 memory line being the largest-scale semiconductor production line to date.
The advanced node is part of a strategy to "further strengthen its presence in the flagship mobile device market," Samsung says. It also intends to expand the use of LPDDR5 memory into other areas, such as automotive applications.