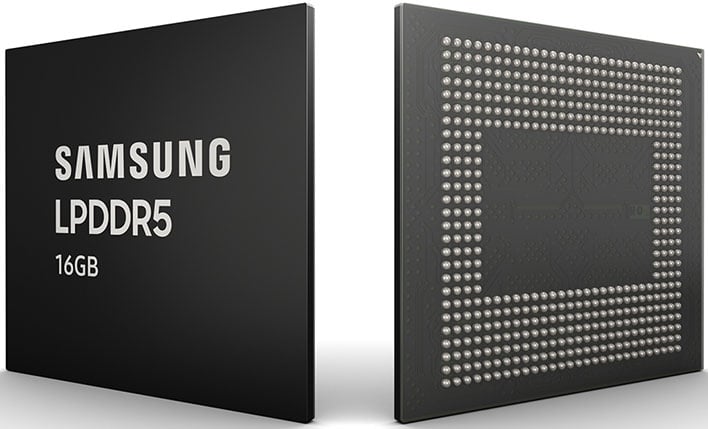 Samsung on Tuesday announced it has begun mass producing 16-gigabyte (GB) low power DDR5 (LPDDR5) mobile DRAM packages that will the next generation of premium smartphones. The memory maker is the first the mass produce these parts, just as it was when it began mass producing 12GB LPDDR5 packages in July of last year.
The move to 16GB LPDDR5 packages not only brings more capacity, but faster speeds as well. According to Samsung, this will help enable cutting edge technologies, and in particular enhanced 5G experiences and artificial intelligence (AI) workloads. Specifically, Samsung pointed to "graphics rich gaming and smart photography" as being beneficiaries of its new memory packages.

In terms of the speed these 16GB LPDDR5 solutions offer, Samsung says they race along at 5,500 megabits per second (Mbps). That is around 1.3 times faster than the previous generation LPDDR4X, which checked in at 4,266MB/s. And with regards to power efficiency, Samsung claims its 16GB LPDDR5 packages deliver a 20 percent power savings compared to 8GB LPDDR4X packages.
These new packages are comprised of eight 12Gb chips (same as found in its 12GB LPDDR5 packages) and four 8Gb chips. They're built on 10-nanometer class technology.
"Samsung has been committed to bringing memory technologies to the cutting edge in allowing consumers to enjoy amazing experiences through their mobile devices. We are excited to stay true to that commitment with our new, top-of-the-line mobile solution for global device manufacturers," said Cheol Choi, senior vice president of memory sales & marketing, Samsung Electronics. "With the introduction of a new product lineup based on our next-generation process technology later this year, Samsung will be able to fully address future memory demands from global customers."
Where will this speed and capacity actually come into play? Smartphone capabilities are becoming increasingly sophisticated, especially in the flagship space. In its announcement, Samsung hammers home the utility for gaming, with more and faster memory aiding with ultra high resolution graphics and enhanced experiences. We'll have to wait and see how it pans out (Samsung often extols the benefits for gaming, AI, and 5G when announcing new memory products).

Looking ahead, Samsung says it is expanding LPDDR5 mobile DRAM production at its Pyeongtaek site. It plans to mass produce 16Gb LPDDR5 products in the second half of the year, in conjunction with a 6,400Mb/s chipset.
"Such relentless innovation is expected to well-position Samsung to further solidify its competitive edge in markets such as premium mobile devices, high-end PCs and automotive applications," Samsung said.