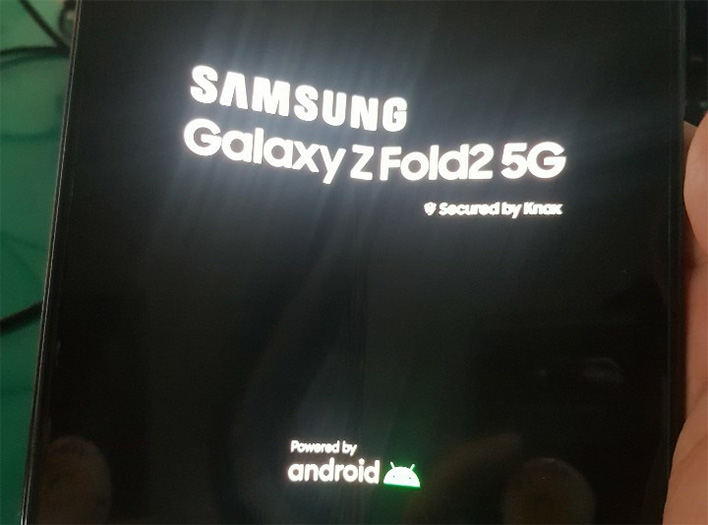 I'm going to commit the cardinal sin of journalism and bury the lede (though only a little). Why? Because I've had it up to here (picture my hand at the upper section of my forehead, with my eyebrows squinting angrily inward) with supposedly 'leaked' photos that are blurry and in low light, as if a 5-year-old was running through the house with their Fisher Price camera and hitting the shutter button along the way. Except those pics might be a little better than the leaked photo of the Galaxy Z Fold 2 5G that is making the rounds (and there's your lede, folks).
The cropped photo in question is up top (click to enlarge and to see the entire snapshot), posted by XDA Developers (it originally came from Naver, which was later deleted, though not before Twitter user hwangmh01 snagged a copy).
There is not a whole lot to discern from the photo, just a few tidbits. For example, it looks as though Samsung will officially stylize the second-generation foldable phone as the Galaxy Z Fold2 5G, with no space between "Fold" and "2."
If you look closely, you can also make out a punch-hole design on the top of the display for the front-facing camera. Overall, it looks similar to the first-gen Galaxy Z Fold, but the punch-hold is more centered on the right half of the screen, without that weird notch on the right side that its predecessor had. Assuming this is a shot of the actual phone, it looks like rumors of a in-display front camera were off the mark.

The Galaxy Z Fold 2 5G (yes, I'm using a space) is also quite a large phone when opened up. Past leaks have pegged it as sporting a giant 7.7-inch screen on the inside, up from 7.3 inches on the first-gen model, with a 120Hz refresh rate. The cover screen is said to be 6.23 inches with a 2267x819 resolution, up from 4.3 inches on the current model.
Underneath the hood, the Galaxy Z Fold 2 5G is also expected to arrive with either a Qualcomm Snapdragon 865 or Snapdragon 865+ processor and at least 16GB of RAM (up from 12GB on the current model). 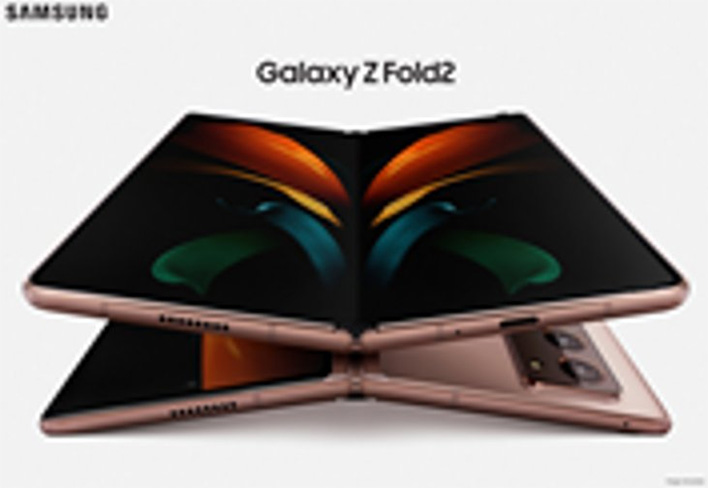 This leaked photo comes on the heels of an also-blurry leaked press render, as recently posted to Twitter by Ice Universe. It looks the same for the most part, including the stylized branding that Samsung is apparently going to use.
Look for Samsung to introduce the Galaxy Z Fold 2 5G and other devices during its virtual Galaxy Unpacked event on August 5.