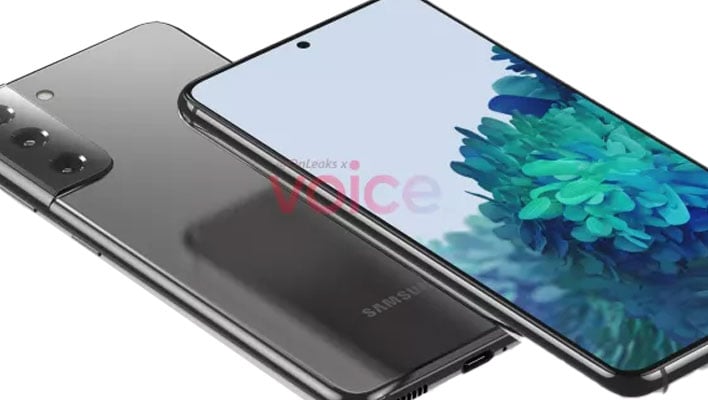 The Galaxy S20 Ultra 5G is not very old, but be that as it may, there have been several leaks of Samsung's next flagship smartphone, the Galaxy S21 Ultra. What look to be official press renders have surfaced in recent weeks, and as for the actual hardware makeup of the upcoming handset, a new leak purportedly outlines some of the key specifications.
We have been hearing about the Galaxy S21 since at least August. If we go back to the summertime, a report surfaced suggesting it would debut with S-Pen support, which would mark the first time for a Galaxy S series smartphone. It also thrust into question the future of the Galaxy Note series, if the Galaxy S21 is offered with a big display and S-Pen support.
More recently, Steve Hemmerstoffer (popularly known as @onleaks) posted some renders, one of which you see above. They show an attractive flat display with a punch-hole situated near the top, in the center of the phone, for the front-facing camera. And on the back of the device we can see a "unique rear camera housing design."
Fast forward to now and the folks at 91mobiles received a list of supposed specifications from leaker Ishan Agarwal. It is said that internally, the phone is known as O3 with the model number SM-G998U. Here is the rundown...
The display size is a little fuzzy, as the site reports it as being 6.8 inches, but also posted a list of specs that show it as 6.7 inches. Either way, it is identified as a Dynamic AMOLED 2X screen. There is no new information about the refresh rate, but one of the rumors going around is that Samsung will up the ante to 144Hz instead of 120Hz. We shall see.
As for the processor, I can only assume the Exynos 9 Octa 991 is for the international variant, while models bound for the US will end up with a Qualcomm Snapdragon 875. As for the rest, color me a little bit underwhelmed. These are flagship specs, sure, but a few of them already exist on the Galaxy S20 Ultra 5G, including the 108MP main camera and 5,000 mAh battery.

It will be interesting to see what strides Samsung will make with regards to overall camera performance. That is one of the major selling points of a smartphone.
The phone is rumored to debut in early 2021, priced at Rs. 92.999. That works out to around $1,260 in US currency if going by the current conversion rate, though that is not typically how companies price their products in different territories. Incidentally, Qualcomm is planning a Tech Summit event for December 1-2, where it will very likely unveil the Snapdragon 875.