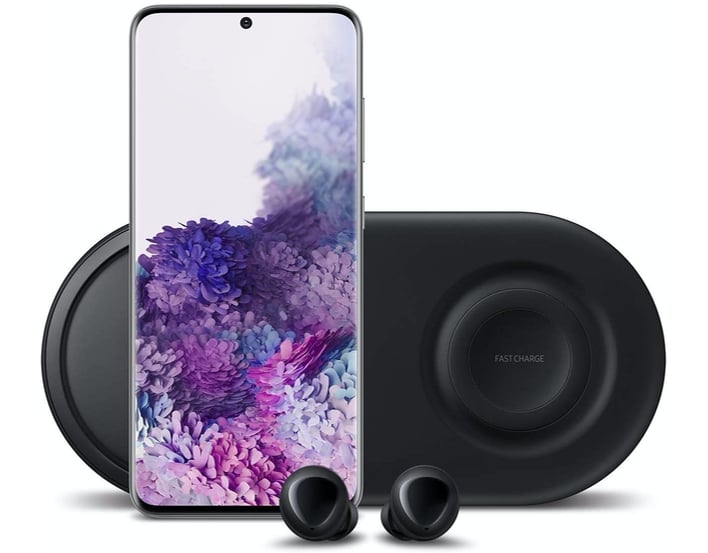 The Samsung Galaxy S20 family is sure to be one of the most popular smartphone releases this year, and with preordershaving already kicked off, now is the time to start scouting for incredible deals. Saving a few bucks here and there is paramount with a device like the Galaxy S20, as it has a starting price of $999, which isn't exactly chump change these days.

Retail giant Amazon is carrying the unlocked version of the Galaxy S20 for its regular retail price of $999. However, it is also throwing in a couple of freebies to sweeten the deal. For starters, you'll get a free pair of Galaxy Buds wireless earbuds, which are among the best on the market.

The Galaxy Buds have a retail price of $129.99, are tuned by AKG, and give you up to six hours of battery life. An additional seven hours back be added with the included wireless charging case. Unfortunately, these aren't the newer Galaxy Buds+ with longer battery life and redesigned speakers, but we aren't going to argue with free.

The next freebie being added to the deal is Samsung's Wireless Charger DUO Pad, which has a retail price of $99.99. The DUO Pad allows you to charge up to two smartphones at once (or a smartphone and a smartwatch), and is Qi certified. It supports Fast Charge 2.0, which can recharge a Galaxy S9 or Galaxy Note 9 at up to 7.5W, or the Galaxy S10/Galaxy Note 10 and newer at 12W.

As for the Galaxy S20, it's powered by Qualcomm's new Snapdragon 865 SoC paired with a Snapdragon X55 5G modem, 12GB RAM, and 128GB of internal storage (a microSD slot supporting up to 1TB is included as well). It comes with a 6.2-inch, 120Hz QHD+ Infinity-O Super AMOLED display and a trio of cameras on the back (housed within a rather large rectangular pod).

You can preorder the Galaxy S20 bundle right now from Amazon, and it will ship on March 6th.