MWC 2020 will be here before you know it, and at that event, many expect Samsung to go official with its new Galaxy S11 family. The line is expected to include the Galaxy S11+, Galaxy S11, Galaxy S11e smartphones. A new leak has surfaced, and this one drops hints about the battery and the screen the S11+ will use.

One of the leaks shares an image of a battery alleged to go inside the Galaxy S11+, as verified by the SafetyKorea South Korean certification database. The database page mentions the SM-G988 smartphone, which was previously linked to the Galaxy S11+. A photo of the battery surfaced as well with markings that indicate its typical capacity is 5,000 mAh, and the rated capacity is 4,885 mAh. 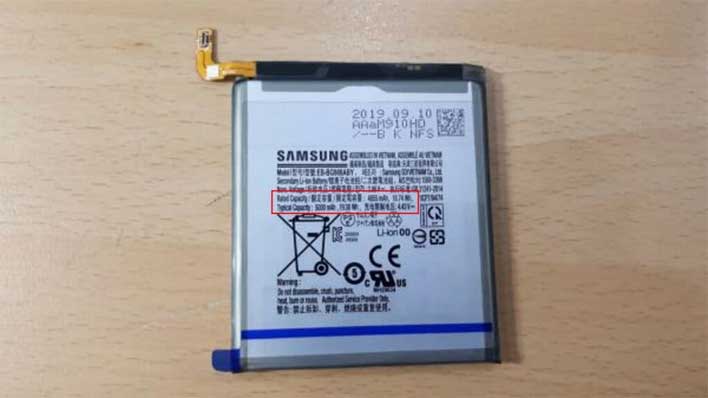 Samsung has recently marketed battery sizes based on the typical capacity while it used the rated capacity in the past. Assuming the leak is accurate, this will be the largest battery that Samsung has ever used inside a Galaxy S or Note device. Samsung has used larger batteries in other devices, such as its Galaxy M30 with a 6,000 mAh battery.

The big battery will be needed to give run time expected for a flagship device that is using a 6.9-inch AMOLED display. The display is rumored to have a 120Hz refresh rate. That high refresh rate has been hinted at by the OneUI 2.0 beta that was for the Galaxy Note 9, which supported configuration for 120Hz. The device is expected to support 60Hz refresh rate as well. Other rumors have suggested that the smartphone will support 5G and use a Snapdragon 865. A rumor from a few days ago indicates that the S11 will have a 108MP main camera with 5x zoom.