I will admit, I am an impatient person, which can have its challenges when writing about unreleased technology. For example, we all know Intel is getting ready to launch its next-generation Lakefield CPUs. But how will they perform, what impact will Lakefield's graphics have, and when exactly can buy a laptop with Lakefield inside? Those are all questions that are frustrating left unanswered for the time being, though yet another benchmark leak perhaps provides some clues.
This time around, it is an upcoming variant of Samsung's Galaxy Book S laptop that gives us a peek at one of Intel's Lakefield processors. The folks at NotebookCheck got their mitts on one, and ran it through some benchmarks. And the results are a little surprising, to say the least. More on the performance numbers in a moment.
The Galaxy Book S in question wields a Core i5-L16G7 processor. Borrowing somewhat from ARM's big.LITTLE approach, this chip consists of a bigger Sunny Cove performance core to do the heavy lifting, and four lower power Tremont efficiency cores. The end result is a 5-core/5-thread CPU leveraging Intel's Foveros 3D chip packaging.
The Core i5-L16G7 has a 1.4GHz base clock, 3.0GHz max single-core turbo frequency, and 1.8GHz max all-core turbo clock, along with 4MB of cache. On the graphics side, it is rocking 64 execution units (EUs) clocked at up to a modest 500MHz. These are not mind blowing specifications, but also keep in mind that the TDP is a scant 7W.
There have been two products announced with this Lakefield processor inside—Lenovo's ThinkPad X1 Fold and Samsung's Galaxy Book S. The specs on the Galaxy Book S are as follows...
Now that we have an understanding of what we are looking at, let's get into the benchmark data.

For whatever reason, the Lakefield part never exceeded 2.4GHz, even though the max single-core boost clock is 3GHz. This resulted in what the site commented was "disappointing single-core performance." In Cinebench R15, the chip only scored 88.3 points in the single-core test, which is around two-thirds lower than a Core m3-8100Y "Amber Lake" CPU.
It fared better in the multi-core test, but the single-core result is disappointing. At the same time, there are too many variables for us to draw any concrete conclusion. We have no idea what state the drivers are in, or whether Samsung is intentionally throttling the CPU to keep temps in check. There could even be something wrong with this particular build. 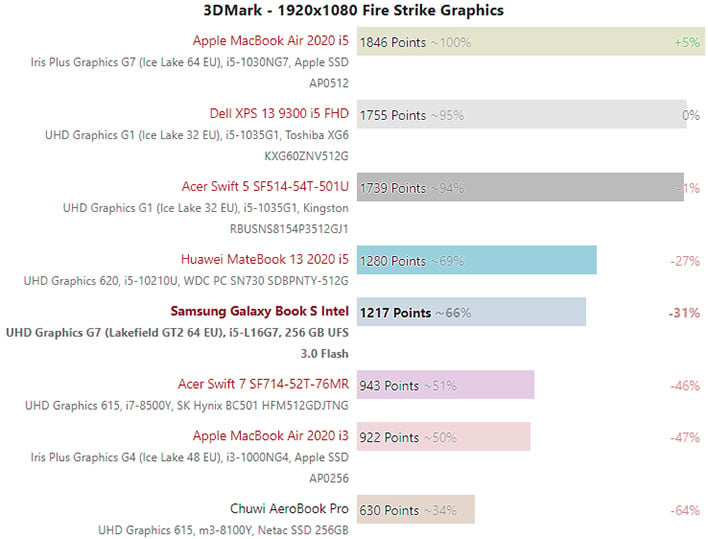 The Galaxy Book S and, by extension, Core i5-L16G7 picked up the pace in 3DMark's Fire Strike test. It did not lose to Amber Lake this time around. It scored around 93 percent higher than the laptop with a Core m3-8100Y, and around 29 percent higher than the Acer Swift 7 with a Core i7-8500Y.
That said, the site notes that "graphics performance is significantly worse than that of a normal Iris Plus Graphics G7 due to the lower clock rate," and falls somewhere between UHD 615 and 620 Graphics.
The low TDP explains some of the results. But is there anything to truly be concerned about? That is where patience comes into play, because all we can do is wait and see for ourselves.