Samsung is expanding its laptop line with an upgraded and expanded family of Galaxy Book 2 models, including the Galaxy Book 2 Pro, Galaxy Book 2 Pro 360, and Galaxy Book 2 360. There are five main SKUs spread across the three refreshed product lines, each built to Intel's latest Evo certification with 12th Gen Core i5 and i7 processors underneath the hood.
The announcement comes on the heels of Intel unpacking a bevy of low power Alder Lake-U and Alder Lake-P processors for ultralight Evo laptops. Intel says there are 250 laptop models arriving this year that will incorporate its new chips, which means it could be difficult for manufacturers to stand out from the crowd. However, it would be a mistake to overlook what Samsung has to offer.

We generally tend to associate Samsung with premium smartphones and displays (including TVs and monitors), but as we saw in our Galaxy Book Pro 360 review a few months ago, it can compete in the laptop space just fine. We came away impressed with that model's premium thin and light design, vibrant OLED display, strong productivity performance, and all-day battery. 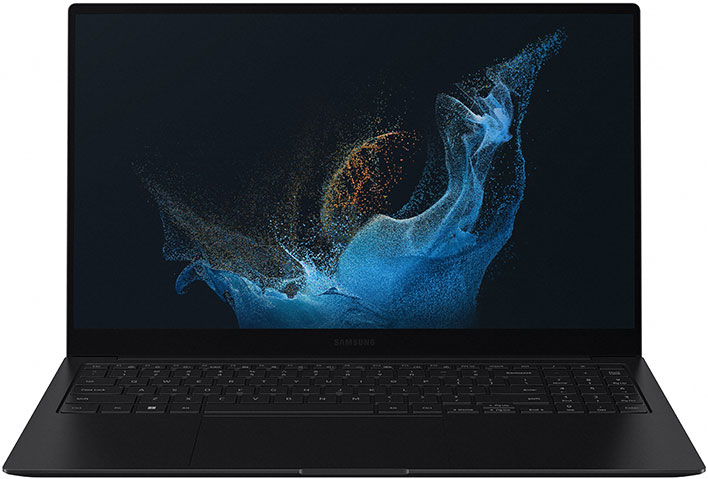 The Galaxy Book 2 Pro, Galaxy Book 2 Pro 360 with S Pen support, and Galaxy Book 2 360 look to offer the same premium styling and all-day workhorse chops, but with updated hardware. Starting with the Galaxy Book 2 Pro, Samsung's offering both 13.3-inch and 15.6-inch options, both with an AMOLED screen and 1920x1080 resolution.
Those who opt for the bigger 15.6-inch model can choose between integrated Iris Xe and discrete Arc graphics. It also sports 8GB, 16GB, or 32GB of LPDDR5 RAM, up to 1TB of NVMe SSD storage, a 1080p webcam with dual array mic, 5W stereo speakers tuned by AKG with Dolby Atmos support, and a backlit island type keyboard with a 3-row numeric.

The 13.3-inch Galaxy Book 2 Pro comes with many of the same features, save for the Arc graphics option, 5G connectivity, and 3-row numeric. Those are only available on the 15.5-inch model. It also employs 4W speakers instead of 5W. Both laptops are rated to deliver up to 21 hours of battery life.
Samsung says the Galaxy Book 2 Pro will start at $1,049.99 and be available to preorder on March 18, followed by a retail release on April 1 (no foolin'!). 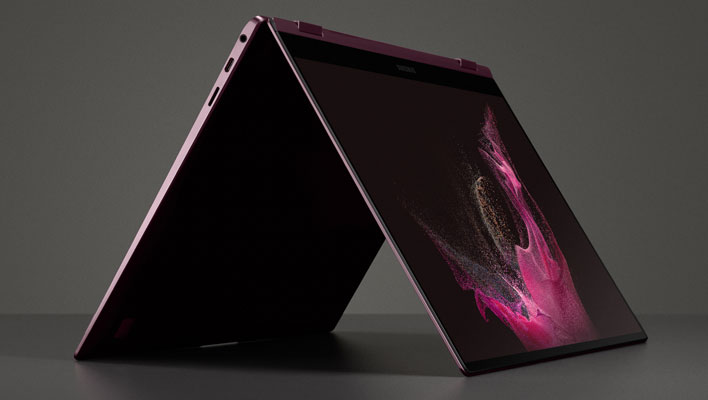 The Galaxy Book 2 Pro 360 is also being offered in 15.6-inch and 13.3-inch form factors, both in AMOLED form with a 1920x1080 resolution, up to 500 nits brightness, 120 percent coverage of the DCI-P3 color space, and HDR support. We had hoped these next models would up the ante with a 4K option, but it's it's still 1080p or bust.
These fit into the 2-in-1 realm by folding all the back to use as a tablet, or halfway in between to set up in tent mode. You also get S Pen support on these models. 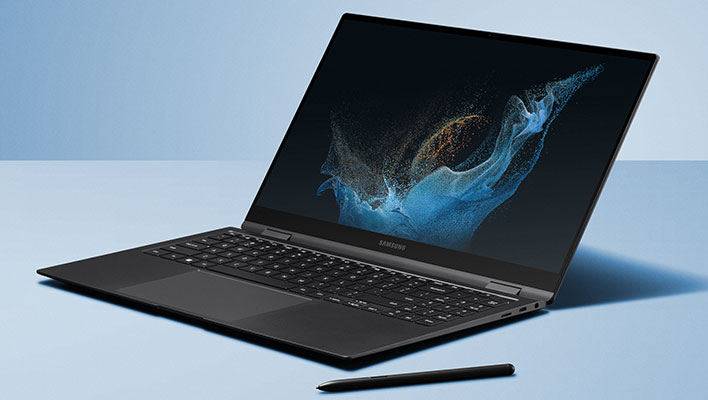 Here again the specifications between the 13.3-inch and 15.6-inch variants are mostly the same, with both offering 8GB, 16GB, and 32GB LPDDR5 memory options, 256GB, 512GB, and 1TB NVMe storage options, Wi-Fi 6E and Bluetooth 5.1 connectivity, stereo speakers (4W on the 13.3-inch and 5W on the 15.6-inch), and the same ultra-long battery life as the Galaxy Book 2 Pro models.
The port selection between the Book and non-Book laptops are a little different, though. Here you get a Thunderbolt 4 port, two USB-C ports, headphone/microphone combo jack, and a microSD card slot.
The Galaxy Book 2 Pro 360 will start at $1,249.99 and also be available to preorder on March 18, followed by a retail release on April 1. Samsung's also offering a non-Pro variant of the Galaxy Book 2 360 with similar specs, but 8GB and 16GB LPDDR4 memory options and 256GB and 512GB storage options. S Pen support is included here as well. The toned down specs come at a cheaper price, with the Galaxy Book 2 360 starting at $899.99.