After mainly focusing on its high performance Alder Lake-H processors in the mobile space for its CES unveil last month, Intel today is giving its Alder Lake-P and Alder Lake-U lineups an official launch. The product stack spans 20 chips high and includes low and ultra-low power mobile CPUs for the next generation of thin and light laptops that will begin shipping next month. 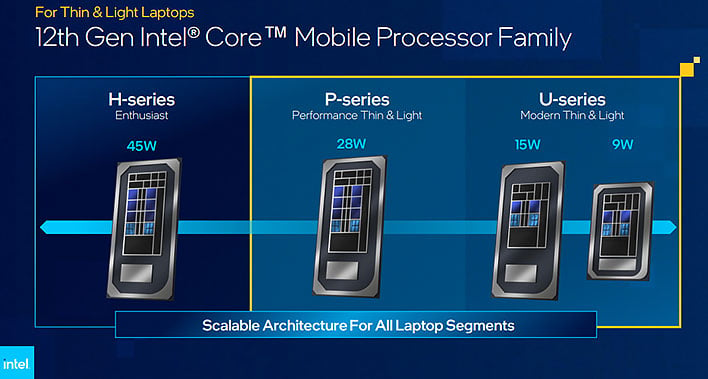 Much of what Intel revealed today amounts to reiterating what it already put out there at CES. However, we did a good dose of performance claims as well with this shot of new info. Even though Intel's mobile announcements were heavily skewed towards Alder Lake-H at the time, it did also reveal SKUs and specifications for Alder Lake-P and Alder Lake-U. What we get today is a look at the complete lineups, plus a few other details not previously divulged.

As we saw before, the Alder Lake-P stack stands six CPUs high. These are all 28W (UP3) models with a mix of P-cores and E-cores. At the top of the pile sits the Core i7-1280P with six P-cores clocked at 1.8GHz to 4.8GHz, eight E-cores clocked at 1.3GHz to 3.6GHz, and 24MB of L3 cache. The GPU portion sports 96 EUs clocked at up to 1.4GHz.
Most of the rest sport four P-cores and eight E-cores at varying clocks, save for the Core i3-1220P, which consists of two P-cores and eight E-cores, along with 12MB of L3 cache and a 64 EU GPU.
Then there's the Alder Lake-U lineup split evenly between 15W (UP3) and 9W (UP4) models, including Pentium and Celeron (one each) in each tier. All 14 SKUs mix P-cores and E-cores to some extent, and of course clock speeds vary, going as high as 4.8GHz (via Turbo Boost). 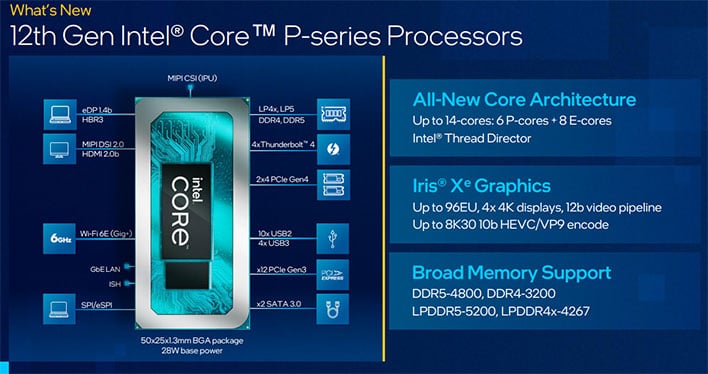 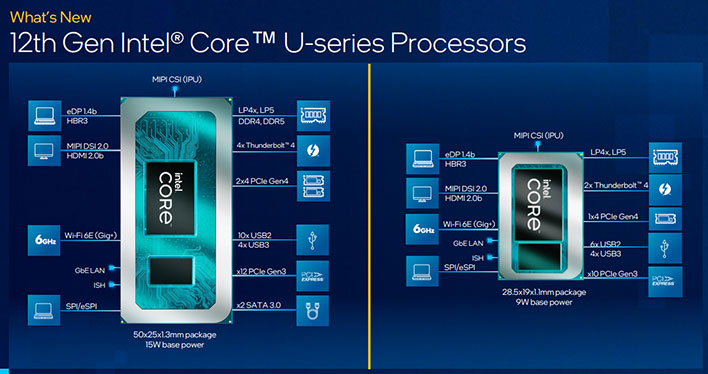 While the SKUs are mostly a recap from CES, Intel provided additional details about the features that accompany Alder Lake-P and Alder Lake-U. There's some recycled information here too, like Wi-Fi 6E and DDR5 support, but we now know that both Alder Lake-P and the 15W Alder Lake-U models support up to four Thunderbolt 4 ports, four USB 3.x and 10 USB 2.x ports, two sets of four PCIe Gen4 lanes, and a dozen PCIe Gen3 lanes.
On the 9W Alder Lake-U stack, the lower power draw comes at the expense of some I/O. These chips support half as many Thunderbolt 4 ports (two), four USB 3.x ports, and six USB 2.x ports. You're also looking at a single set of four PCIe Gen4 lanes and 10 PCIe 3.0 lanes.

In terms of performance, Intel is raising the flag on some bold claims, even in heavier-duty multithreaded workloads and of course gaming leadership as well.

There's nuance here in this slide, however, as Ryzen 7 5800U is a 10 - 25 Watt configurable TDP (Thermal Design Power) CPU, whereas Intel's Core i7-1280P is a 28 Watt base to 64 Watt max Turbo power chip. The Core i7 1265U represented here, however, is a 15 - 55 Watt CPU. So while relative performance looks strong, the real test is going to be what our independent benchmarks show relative to power, thermals and most importantly battery life. It will also be interesting of to see how these new lower power Alder Lake CPUs stack up to AMD's recently launched Ryzen 6000 Series. 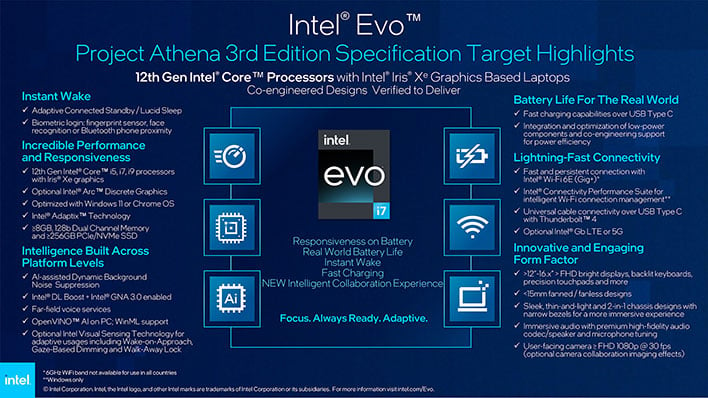 Intel's also rolling out the third edition of its Evo platform. The latest variant offers up intelligent collaboration, at least nine hours of battery life, instant wake time (less than 1 second, fast charging (four hours of battery life in 30 minutes of charging), and a few other odds and ends.
Intel says there are over 250 laptop models arriving this year built around Alder Lake-P and Alder Lake-U, including over 100 Evo designs.