If you want to purchase a new [current generation] Samsung smartphone with 5G in the United States right now, your cheapest option is the Galaxy S20, which is priced at a hefty $999. However, Samsung is offering up a cheaper alternative now with the incoming Galaxy A71 5G, which will be priced at a much more palatable $599.

The $400 price difference doesn't mean that the Galaxy A71 5G is some barebones device either; it's actually pretty well equipped for its class. The smartphone doesn’t use an Exynos SoC like some of Samsung’s cheaper phones, and instead uses a Qualcomm Snapdragon 765G SoC paired with 6GB of RAM. The Snapdragon 765G has a higher GPU clock than the Snapdragon 765 and includes an integrated Snapdragon X52 5G modem; both sub-6G and mmWave 5G bands are supported.

The Galaxy A71 5G features a large 6.7-inch AMOLED display with a hole-punch cutout for the 32MP selfie camera, a 4500 mAh battery, 25W fast charging, and four cameras on the rear (including a 64MP primary shooter). We should also mention that you'll find 128GB of internal storage onboard, which should be plenty for most consumers shopping in this price range. There's also a microSD slot, which is expandable up to 1TB. 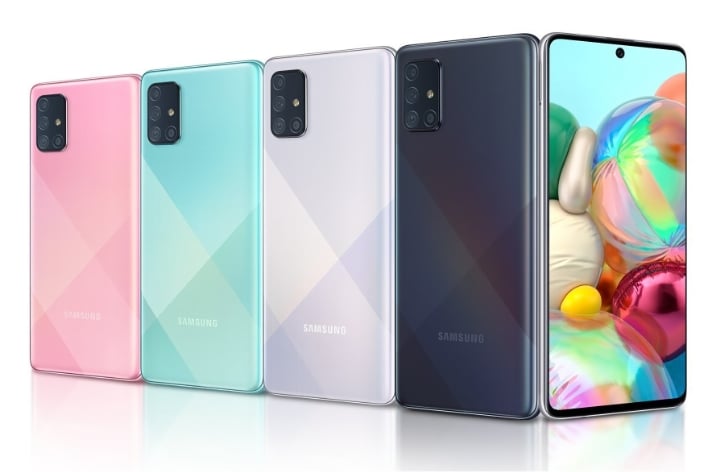 Samsung is going to launch the Galaxy A71 5G on June 19th here in the United States, initially with T-Mobile and Sprint. T-Mobile, for example, is offering the smartphone for $300 if you add a qualifying line or switch from another carrier -- the $300 discount comes in the form of all credits spread out evenly over the course of 24 months. However, the phone will launch later this summer on Verizon and AT&T networks. There will also be an unlocked model available at that time.

It may be wise to simply wait until the summer when the unlocked smartphone arrives. Samsung is often quick to discount their smartphones, and even the Galaxy S20 and Galaxy S20+ were discounted by $200 within the first couple of months of availability. Nowhere is this more apparent than with the Galaxy A51, which launched back in early May for $399. Within three weeks, the smartphone was selling for just below $300. And last week, Amazon was selling the smartphone for as low as $269.

Could that mean that we'll soon see the Galaxy A71 5G priced at $499 or lower unlocked? It's highly possible given Samsung's track record.