One of the more peculiar statements to come out of a processor company last year was AMD's insistence that the Navi 31 GPU was "architected for 3GHz". As hardware enthusiasts will likely be aware, even the top-end Radeon RX 7900 XTX doesn't approach 3GHz most of the time. It can go well past that clock rate in some workloads, though; ComputerBase tested the XTX against the GeForce RTX 4080 with both cards overclocked and found that Navi 31 can reach as high as 3.5GHz in Blender—and it doesn't use an unreasonable amount of power to do it, either.


ComputerBase says it pushed both cards to the limit. The site used a Sapphire Radeon RX 7900 XTX Nitro and a GeForce RTX 4080 TUF OC card, both custom models. ComputerBase actually says that the RX 7900 XTX reference design isn't useful for the comparison because the power limit is sharply restricted to just a 15% increase, raising it to 408 watts. Furthermore, ComputerBase says that the card will gladly slurp down the extra power without giving much of an increase in clock rate. 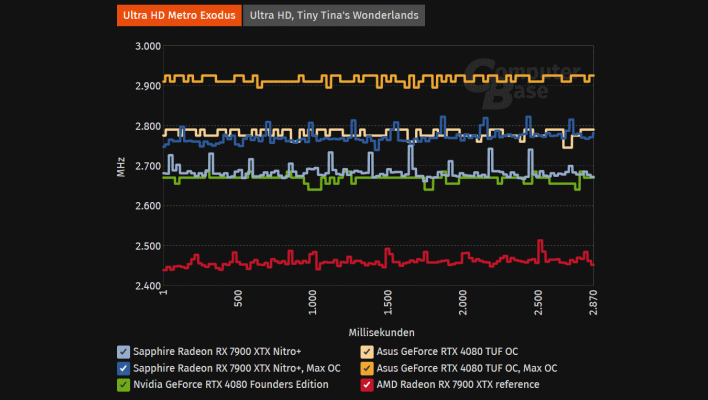 
Instead, the Sapphire card that was tested already boosts higher than the reference design, hitting around 2700MHz in Metro Exodus, for example. That's in part because it has a higher stock power limit of 433 watts, and after raising the power limit it can go as high as 500 watts. Even still, ComputerBase reports that the average in-game clock rate of the "maximum overclocked" Sapphire card is only around 2832MHz in games—a bit shy of that tantalizing 3GHz number.


The curious detail is that, while it can't quite reach the storied 3GHz in games (even when overclocked "to the max"), the overclocked Radeon card does break past that number by quite a bit in a compute workload. Actually, even the stock Radeon RX 7900 XTX can do some 3050MHz in the Blender benchmark, apparently, but the overclocked model hit a peak at 3548MHz, albeit not especially stably. Backing off slightly to 3455MHz made things stable again, which is still an astonishingly-high frequency for a GPU. 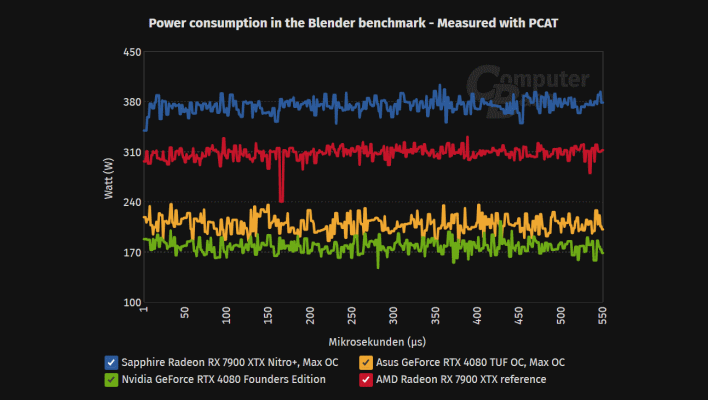 The even-more-interesting fact is that despite a 500-watt power limit, which is a hard limit for game performance, the Sapphire Nitro card doesn't even come close in Blender, drawing just 374W. Don't get us wrong, 374W is still an immense amount of power for a GPU, but it's far less than the 500W that the same card was using in games. ComputerBase doesn't explain what the performance limit was in Blender, but likely it was either heat or voltage. We do feel the need to point out that ComputerBase investigated clock rates in Blender and posted performance numbers in games, but nothing for the Blender benchmarks.

It's fascinating to see the curious clocking behavior of Navi 31, but as ComputerBase itself points out, this probably wasn't intended by AMD. After all, the whole purpose of "RDNA" graphics is for PC gaming; AMD has a whole other line of "CDNA" chips for compute tasks. Hopefully AMD can figure out how to get Navi 31 boosting higher in games, too.