As the probe Solar Orbiter skims by Earth on its way toward the Sun, debris from the Russian anti-satellite missile test (ASAT) could endanger its mission.

On November 15th of this year, a Russian ASAT destroyed an out of service Russian satellite. This left behind a field of orbital debris and the international space community enraged at what was called a reckless action by many. The crew aboard the International Space Station was directed to take refuge in radial modules until the threat of the ISS colliding with any of the debris was assessed and deemed to not be a danger. Now the probe Solar Orbiter is being watched closely as it begins its flyby of Earth on its way toward the Sun.

The European Space Agency's Solar Orbiter will begin its flyby of Earth on November 27th, in order to line it up for what will be six flybys of Venus as it makes it way toward the Sun. The spacecraft has been in spaceflight for a year and eight months on a mission to capture the first-ever direct images of the Sun's poles, and more.


The agency does say that the risk to the probe from the orbital debris left behind by the ASAT is minimal. However, they also caution that minimal does not mean a zero chance, and that the risk is greater than any other flyby it has ever performed. The agency also points out that the risk was not there when the Solar Orbiter went by Venus, nor did it have to perform risk analysis as BepiColombo recently zipped by Mercury. They point out that orbital debris is unique to Earth and that it puts future missions at risk if something is not done about it now. 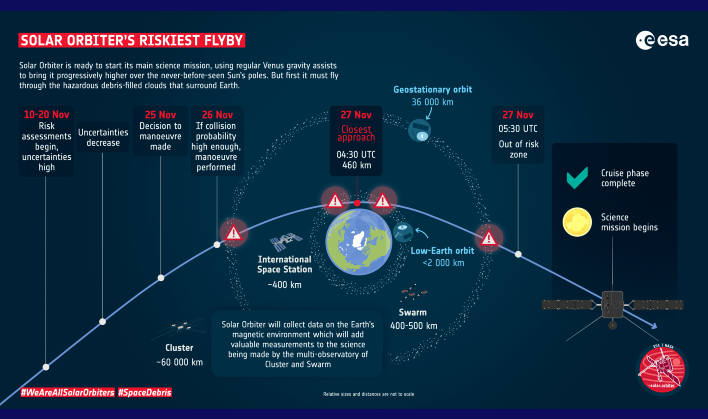 Orbital debris includes much more than just the space junk left behind by the Russian ASAT incident. It includes hundreds of millions of debris particles five millimeters in size and smaller. Don't let the small size fool you though. When other objects such as a satellite are traveling at high speeds, collisions with these small particles can cause a lot of damage. This was the case in 2016 when a solar panel on ESA's Sentinel-1A spacecraft was struck by one of these particles and caused an area of damage of 40cm across. This was believed to have caused a small reduction in onboard power and a slight change to the orientation and orbit of the satellite.


ESA stated on their website that in the unlikely situation that a maneuver is necessary to avoid the debris from the Russian ASAT, that it would be performed on Friday, November 26th. This would be approximately six hours before the probe's close flyby of Earth began. It is worth noting that every time a spacecraft has to make evasive maneuvers not scheduled it is more costly and places a higher risk on the craft not being successful on its mission. 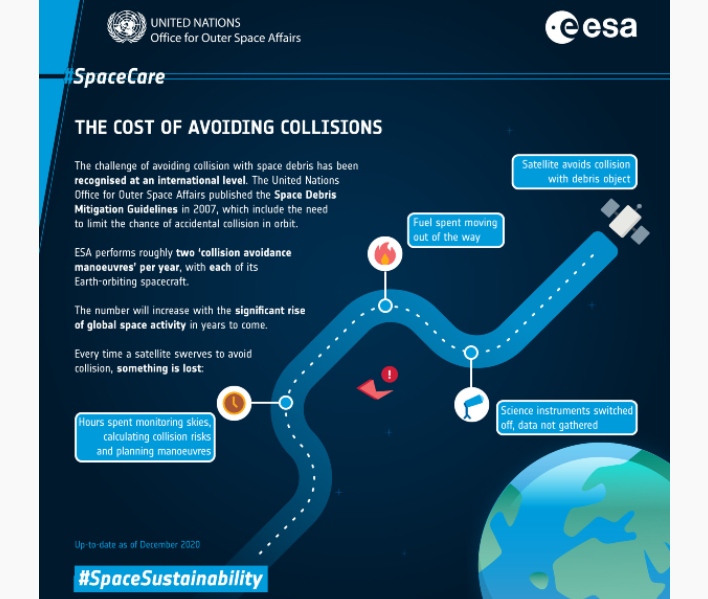 As more and more satellites are launched into Earth's orbit, the risk of orbital debris colliding with them will increase as well. The chance that all of this clutter could cause a scenario where future missions to space could be deemed too dangerous to attempt rises along with it. This has caught the attention of space agencies and even the likes of Steve Wozniak, co-founder of Apple. Humankind has created this problem all on its own, and it will be the responsibility of humankind to correct it.