Welcome back, friends, to the show that never ends: a quick peek at the latest GPU leaks. As usual for this generation, this one comes courtesy of kopite7kimi who is tweeting about a specific NVIDIA Ada GPU product with the SKU of either "PG136-SKU360" or "PG139-SKU360".


The famed leaker remarks that this model is based on the AD103-300-A1 GPU. Going by what we know about NVIDIA's upcoming lineup, that means that this is very likely to be the GeForce RTX 4080. It's a slightly cut-down version of the AD103 GPU, as kopite7kimi says that this product would have 9728 FP32 shaders, or "CUDA cores" as NVIDIA likes to call them. A prior leak indicated the RTX 4080 would have 10240 shader cores. 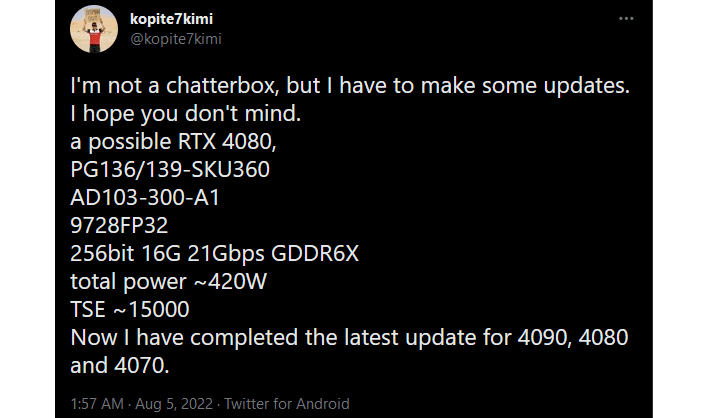 That's a cut of eight shader modules from the full 84 on the AD103 die. No cuts to the memory controllers, though; the predicted specifications for this product include 16 GB of GDDR6X memory running at 21 Gbps across a 256-bit bus, giving the GPU some 672 GB/sec of memory bandwidth. It's not clear if the cuts to shader modules will include any slashes to that GPU's 64 MB of last-level cache.


The purported product would have a total board power of around 420 watts. That would put it in a similar range with the GeForce RTX 3090 Ti despite being on a much smaller process node. As expected, the benefits of the smaller process have apparently been applied to clock rate; kopite7kimi says that this supposed GeForce RTX 4080 scores around 15,000 points in 3DMark Time Spy Extreme.

If you don't follow 3DMark, let's just say that such a score would be a #1 world record at this time—albeit only just barely. The top single-GPU score is currently held by Korean overclocker biso biso who achived 14977 points with a GeForce RTX 3090 Ti slotted into a system with a hot-clocked 28-core Xeon W-3175X CPU.

It is by no means surprising that a next-generation GPU could surpass the previous-generation products but seeing a second-tier GPU demolish a heavily overclocked halo product from the previous line-up is pretty darn impressive.