NVIDIA's high-priced flagship GPU, the GeForce RTX 3090 Ti, is a Titan card in all but name. As befits that class of card, it not only has a wide 384-bit memory bus, but also hot-clocked GDDR6X memory running at 21 Gbps per pin, giving it an out-of-the box bandwidth just shy of 1 TB/sec at 1008.3 GB/sec.

Still, some workloads, like Ethereum mining, are largely bound by memory bandwidth, and for those tasks more is always better. That's likely the thinking behind a test over at TweakTown where writer Anthony Garreffa took a pair of GeForce RTX 3090 Ti cards and overclocked the memory even further.


For some context, the memory on the GeForce RTX 3090 couldn't easily be overclocked because it used 1 GB packages that necessitated placement on both sides of the card. The upgraded "Ti" card—that's "tee aye" not "tie"—uses newer 2 GB packages, which means all twelve DRAM ICs can be underneath a fat cooler on the front side of the card.


That drastically improved cooling allowed Anthony to take the memory on his MSI GeForce RTX 3090 Ti SUPRIM X all the way to 1538 MHz from the default of 1313 MHz. That yields a transfer rate 24.6 Gbps, which in turn gives the card 1181 GB/sec of memory bandwidth on his air-cooled GPU.

Ironically, using the ASUS ROG Strix LC RTX 3090 Ti, factory-fitted with a liquid cooler, he had much less luck, only achieving some 23.4 Gbps. That's still a significant upgrade over the stock 21 Gbps, but a fair bit behind the performance of the MSI card.


In the site's temperature testing, they found unusually high temperatures on the ASUS card's memory compared to the GPU core or the VRMs, suggesting that the DRAM cooling on the ROG Strix LC variant isn't quite as good as on the MSI variant. 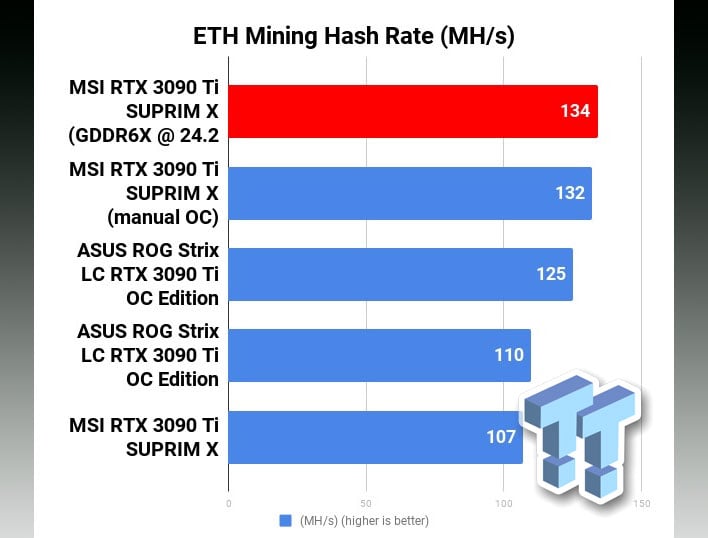 Pushing the memory to its limits on both cards allowed the liquid-cooled ASUS version to increase its Ethereum mining hash rate from 110 MH/s to 125, while the air-cooled MSI card went from 107 MH/s all the way up to 134 MH/s.

That's an absolutely insane performance for a single GPU, although we probably wouldn't want to run our $2000 graphics card at the razor's edge of stability for the extended periods that crypto-currency mining mandates, even considering the reasonable temperatures that the cards kept in TweakTown's testing.