You may recall that we reported back in October on an official revision of the GeForce RTX 3060. Far from a rumor, NVIDIA's website was quietly updated to list an 8GB model of the lower-mid-range GPU. Well, Australian tech-tubers Hardware Unboxed (HWUB) managed to snag one of the 8GB RTX 3060 cards and put it through its paces.
There is not much positive to say about the new card. It costs roughly the same as the 12GB model here in the US, while in HWUB's native Australia you save around 10% of the cost. That's not enough to make up for the 17% lower average performance, though—to say nothing of the over-30-percent worst case.
That might be surprising to novice enthusiasts who have traditionally been told that the amount of video RAM on a card doesn't actually matter, as long as it's "enough." Surely 8GB is "enough" for the kinds of games and settings you'd use on an RTX 3060, right? Indeed, it absolutely is—but that's not the source of this card's problems.
Instead, the issue is the reduced memory bus width. You see, there's no way to go from 12GB of VRAM to 8GB while retaining the same 192-bit memory bus width. The GA106 GPU that most RTX 3060 cards are based on simply doesn't have a 256-bit bus, so that means dropping down to 128-bit width. This cuts memory bandwidth from 360 GB/sec on the 12GB model down to 240 GB/sec on the 8GB model. 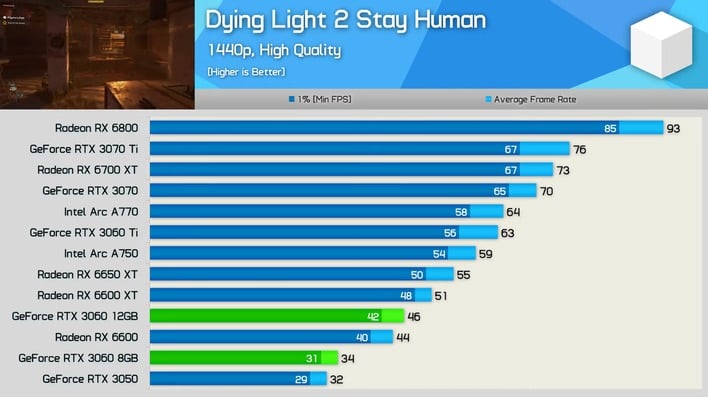 That's a huge swath of memory bandwidth to slash off of a GPU, and it definitely has an effect on the card's performance. Across twelve games, Hardware Unboxed saw an average of 17% better 1080p performance on the RTX 3060 12GB card, a delta which grew slightly in 2560×1440 resolution. In the worst case, the heavily memory-bound Dying Light 2, the difference in the cards was a shocking 35%.
To sum up, the GeForce RTX 3060 8GB card is significantly slower than the 12GB card even in situations where it isn't bound by memory capacity. It costs about the same as the original recipe, and NVIDIA isn't seeding cards to reviewers. When asked what the purpose of this model was, NVIDIA replied that it was to "give more choices to gamers and creators." Right.
The whole situation reminds us of the GeForce RTX 4080 12GB debacle that prompted NVIDIA to "unlaunch" that card. Notably, NVIDIA's announcement regarding driver support for the new cards specifically mentions that the GeForce RTX 3060 Ti with GDDR6 memory will be hanging around along with the new GDDR6X model, but there's no such remark for the RTX 3060 12GB. That could imply that team green has moved its GA106 GPUs completely over to RTX 3060 8GB production.
Our recommendation? Be very careful when buying GeForce RTX 3060 cards in the future, and stay away from the 8GB version unless it gets a significant chunk lopped off its price. It could be a reasonable product, but not for the same money as the 12GB version.