GPU shoppers should be prepared for some new GeForce RTX 3060 SKUs to be released by NVIDIA's AIB partners shortly. We have spotted both an RTX 3060 Ti with improved bandwidth, and an RTX 3060 with narrower bandwidth, being listed in recent days. We are not fond of new models being released with very similar naming but little to distinguish between models which may perform quite differently. It is the old story of buyer beware—so it is best to be informed.
Major PCs and components maker ASUS has revealed a revamped GeForce RTX 3060 Ti with an upgraded memory subsystem. Its TUF Gaming GeForce RTX 3060 Ti (OC Edition) 8GB GDDR6X models add extra bandwidth to this popular choice for gamers by upgrading from GDDR6 to faster GDDR6X (it's in the name).

If you head on over to ASUS's online comparator page, you can see precisely what has changed with these new GDDR6X cards. There is a little bit more than the memory speed to consider. The major change is the TUF-RTX3060TI-8GD6X-GAMING and TUF-RTX3060TI-O8GD6X-GAMING have the new 19 Gbps GDDR6X memory, in place of their predecessors' 14 Gbps GDDR6 memory. Looking deeper, we also see that the new GDDR6X models may pull more power, as ASUS has doubled the 8-pin power connector quota on these GDDR6X models. However, no mention is made of any difference in power consumption within the specs. 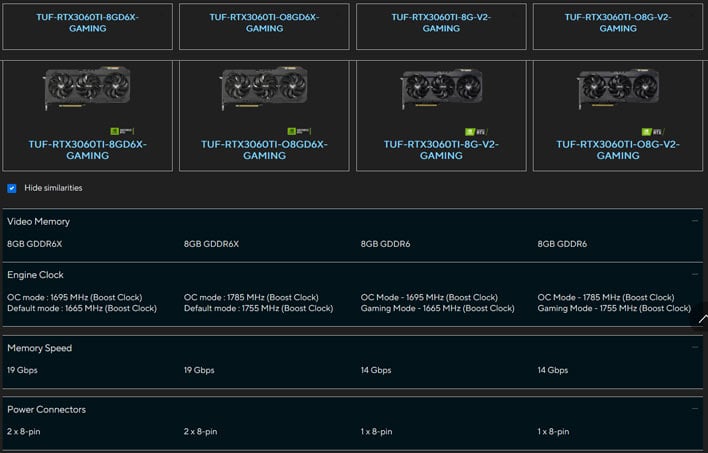 We confirm all other specs listed for the upgraded '8GD6X' and original '8G' models remain the same, including important specs like the OC and default GPU clocks. As for the all important performance, indications are that the revamped GDDR6X toting GeForce RTX 3060 Ti could be up to 10% faster than its GDDR6 ancestor.

Now for the bad news, if you have a GeForce RTX 3060 in your sights. Both ASUS and Manli branded GeForce RTX 3060 graphics cards with 8GB of GDDR6 have been spotted by VideoCardz. Yes, that is a significant downgrade from the 'standard' 12GB GDDR6 used by the 'vanilla' RTX 3060. Prepare yourself for a double whammy, though, as this new RTX 3060 has worse bandwidth than its ancestor, too. The 8GB GDDR6 on a 128-bit bus delivers 240 GB/s memory bandwidth, significantly down from the 12GB GDDR6 (192-bit) model with 360 GB/s. 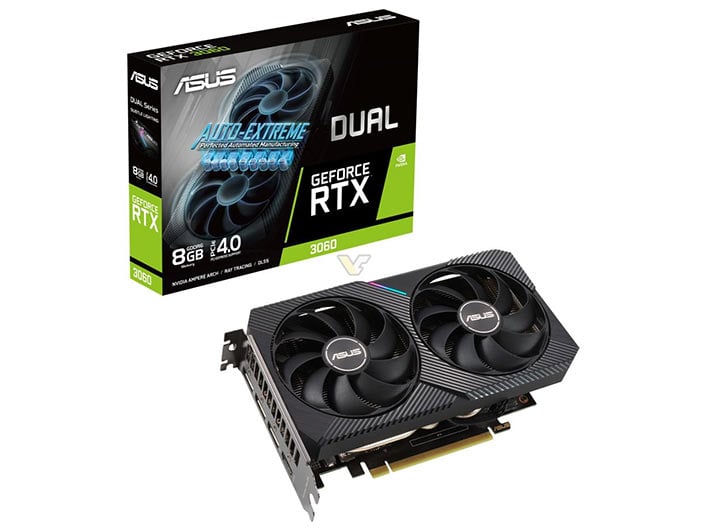 For this memory downgraded sample, we don't have any indicative or leaked performance data to ponder over. We reckon the biggest impacts in performance felt by buyers of the new model will be in memory intensive new AAA titles like Shadow of the Tomb Raider, Call of Duty: Black Ops Cold War, Dirt 5, Red Dead Redemption 2 and others can all easily seek to consume over 8GB of VRAM at higher resolutions / quality levels.
In summary, we say watch out for these memory switches, good and bad. For the new RTX 3060 Ti with GDDR6X there may well be a price premium, and the new RTX 3060 with 8GB of VRAM and narrower bus should definitely be sold for less than the original model with 12GB. At least NVIDIA hasn't muddied things further by tinkering with the CUDA core counts with these new Ampere GPU introductions.

There's no word on pricing or availability of these models, but we'd expect them on the market pretty soon. The GeForce RTX 3060 currently goes for about $380, so we'd expect the 8GB model to come in around $300. Meanwhile, the RTX 3060 Ti is moving for around $430, and we don't reckon the new configuration will be cheaper. Keep an eye out for these new versions if you're shopping for mid-range GeForces.