AMD's nifty FidelityFX Super Resolution (FSR) upscaling technology continues to stretch its legs. It seems the decision to go the open source route is paying off, as multiple developers and platforms have been quick to adopt FSR in the early going. The latest to join the fray is the developer behind RPCS3, the popular PlayStation 3 emulator that works with multiple operating systems, including Windows and Linux.
The intention of FSR is the same as NVIDIA's proprietary Deep Learning Super Sampling (DLSS) technology, in that both aim to improve performance by intelligently upscaling a lower resolution input. FSR and DLSS go about this in very different ways, but the general idea is that a GPU can render scenes at a lower, less demanding resolution, and then scale the images to a higher resolution.
There is some inevitable image degradation compared to rendering at a higher resolution natively, but as we wrote about last month, the problem with pixel peeping (taking a static image and zooming in to nitpick differences in image quality) is that it exaggerates the real-world gaming experience. FSR and DLSS are useful solutions, and in our experience, both work relatively well.
And now FSR is available for PS3 emulation. 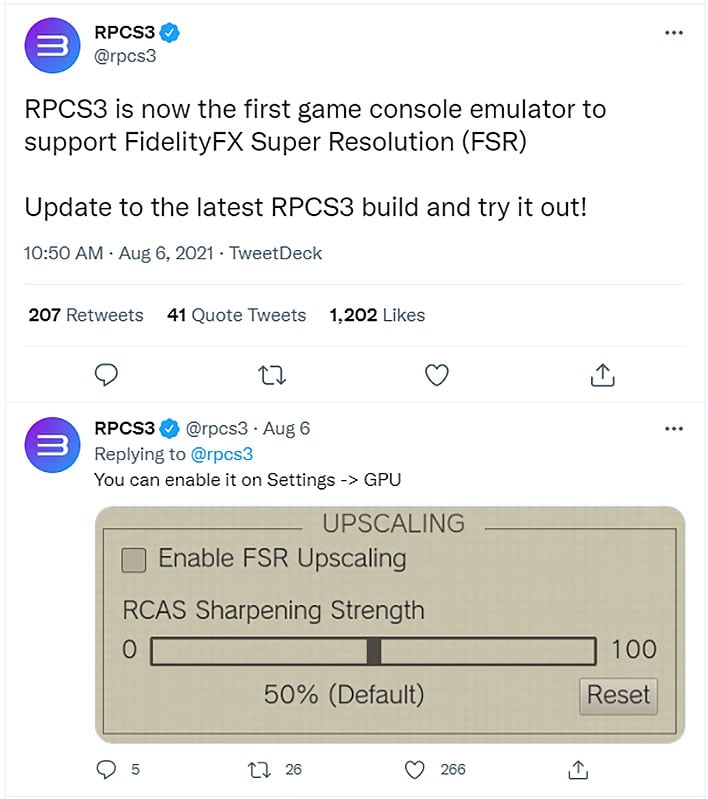 "RPCS3 is now the first game console emulator to support FidelityFX Super Resolution (FSR). Update to the latest RPCS3 build and try it out!," RPCS3's developer announced on Twitter. "You can enablie it on Settings -> GPU."
Further down the thread, the developer explains that the presets are based on input resolution versus output resolution. This is not to be confused with the percentage bar in the image above, as that applies to the emulator's sharpening strength, which is unrelated to FSR. 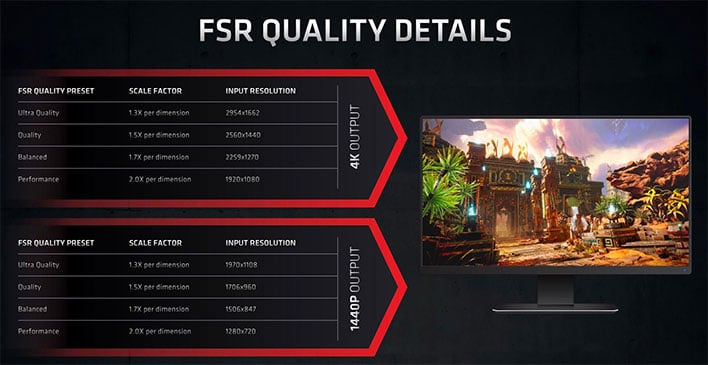 This came up as a question regarding what would be the equivalent setting to FSR's preset options on PC, like Ultra Quality and Quality, for example, since RPCS3 does not give those same choices. The developer points to AMD's slide above, noting that if a user is playing on a 4K resolution display, they can simply set the Resolution Scale close to the Input Resolution values outlined in the first table, to mimic the results.

"The input resolution is whatever you set resolution scale to. The output resolution is the size of the RPCS3 window," the developer explains.
This is a great addition to the emulation scene. RPCS3 lists full compatibility with 62 percent of PS3 games, meaning they can be played with "no game breaking glitches" and good performance. Another 31 percent either can't be finished, have serious glitches, or suffer performance problems, while the remaining ones just don't work.
RPCS3 also recently noted that the emulation software will run on Valve's recently announced Steam Deck handheld, as Steam OS 3.0 is based on Arch Linux, and that has been supported by the project for a long while now. However, the developer cautions to "keep your performance expectations in check" because the Steam Deck's hardware requirements are blow that of the RPCS3. 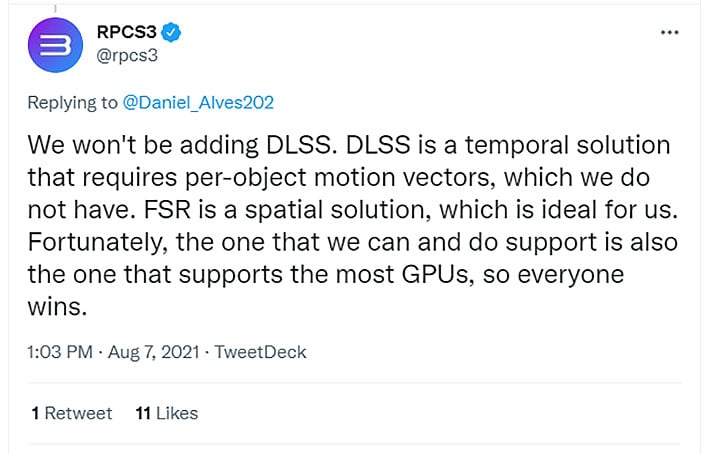 The developer also shot down the notion of supporting DLSS.
"We won't be adding DLSS. DLSS is a temporal solution that requires per-object motion vectors, which we do not have. FSR is a spatial solution, which is ideal for us. Fortunately, the one that we can and do support is also the one that supports the most GPUs, so everyone wins," the developer stated.
If you want to try out the emulator for yourself, check out the RPCS3 Quick Start Guide for how to get it up and running.