Earlier this year, rumors of a Valve hardware console started to float around, but there were concerns about the ongoing chip shortage. Despite this, it seems Valve is plowing forward with its plans as the Bellevue, Washington-based company has announced the Steam Deck starting at $399, with reservations opening on July 16th at 1 PM EST.

The Steam Deck is powered by a custom 4-core/8-thread 3.4GHz AMD Zen 2 CPU with RDNA 2 GPU alongside 16GB of RAM and up to 512GB of PCIe SSD storage. It also features a 7” 60Hz 1280x800 LCD, Bluetooth 5.0, Dual-band WiFi, and stereo speakers, along with the illustrious headphone jack that seems to be missing from most mobile consoles or devices. Another nicety is that multichannel audio is supported over DisplayPort via USB-C, standard USB-C, or Bluetooth. 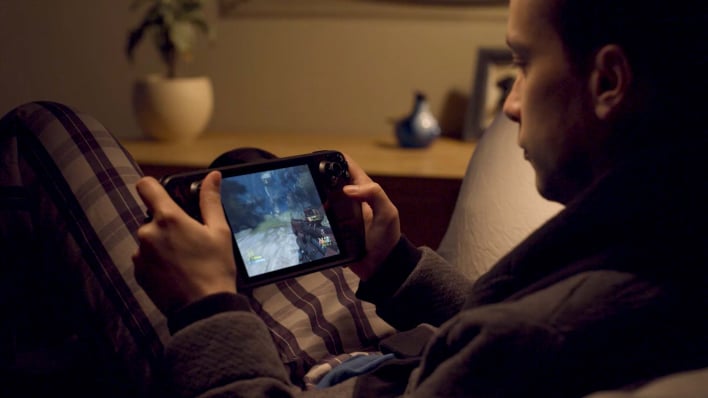 Inside, there is a 40 Whr battery which should provide anywhere from 2 to 8 hours of gameplay depending on the situation. You can also dock the Steam Deck to charge and game at the same time as if this console was a desktop PC. The official dock comes with one USB-A 3.1 port and two USB-A 2.0 ports as well as Ethernet, DisplayPort 1.4, and HDMI 2.0 ports. Power delivery is achieved through a USB-C cable with power passthrough to the docked Steam Deck.

Besides the hardware, Valve has redesigned SteamOS with the Steam Deck in mind and optimized for the handheld gaming experience. The Steam Deck will also come with Proton, “a compatibility layer that makes it possible to run your games without any porting work needed from developers.” With the inclusion of Proton, this means that a flavor of Linux is running underneath SteamOS; thus, you could get to the desktop and use this nifty device like a regular PC.

With the specs and features Valve is putting forth, the Steam Deck could be a rock-solid device for gaming and productivity. If you want to pick one up, they start at $399 and work up to the $649 model with a 512GB NVMe SSD, premium glass, exclusive carrying case, and more. You can check out more details here, but let us know what you think of the Steam Deck below.