We all know Alder Lake is right around the corner, and rumors have increased in frequency pertaining to its successor, Raptor Lake, which allegedly has already been taped-in. Leaks and rumors get a bit murkier when looking further in the distance, but be that as it may, the latest chatter points to a supposed and interesting Royal Core project.
What makes this project so interesting is, as the story goes, it manifested with Jim Keller, Intel's former senior vice president, setting out to build a Zen 5 killer. Keller is a long-time industry veteran who worked at AMD twice during his ongoing career, most recently from 2012 to 2015, having led the development of the Zen architecture. 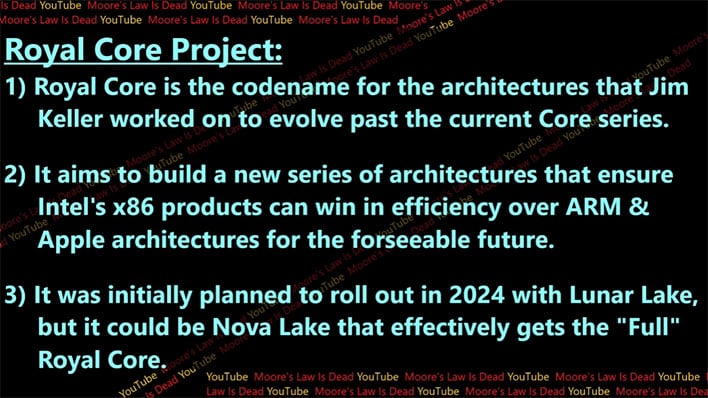 According to leaker Moore's Law Is Dead, the Royal Core project is an attempt to evolve Intel's future architectures past Intel's current Core series, to deliver the biggest performance uplift in decades.

If the story is accurate, that is. The leaker says he's heard these details from multiple sources from in and around Intel, including one who told him about Intel's Xe Super Sampling (XeSS) before it was announced at Intel Architecture Day 21 earlier this week.
Before we go further, let's have a look at Intel's supposed roadmap (only Alder Lake is confirmed)...
These are all hybrid architectures that mix high-performance cores with power efficient cores in the same package. As it applies to Alder Lake, it would be a mix of up to eight Golden Cove and up to eight Gracemont cores, for a total of up to 16 physical cores and 24 threads, depending on the configuration and SKU.
According to the leaked info, Intel had initially aimed put its Royal Core project into action with Lunar Lake in late 2024, though sources seem to believe that Nova Lake is when the full potential will actually be realized.
When it does come to fruition, the expectation is that it will deliver the biggest leap in Intel performance since the introduction of the Core series. Perhaps up to a doubling of the IPC over Golden Cove (for the performance cores), and at least a 30 percent IPC uplift over Meteor Lake. There could even be four-way Hyper Threading introduced at some point.

Sounds good, though these designs are not finished, and it's way too early to know with any accuracy what any of the future architectures will bring, beyond Alder Lake. And even Alder Lake's performance is not yet fully confirmed.
Still, it's interesting that Intel could be working on a Royal Core upgrade, given that AMD has been able to catch up with Intel in performance with its Zen architectures. And obviously Intel would like to not only regain process leadership, but leave little doubt as to which has the better product lineup. We'll see if that happens.