Chip Architect Legend Jim Keller Resigns From Intel After Two Years, Where Does That Leave INTC?

Just over two years ago, Intel scored a major win in the talent department by hiring Jim Keller, a former AMD Ryzen chip engineer (among other accomplishments), to "accelerate [the] transformation" to "fundamentally change the way" silicon is built. It was an exciting announcement for Intel, but it will have to forge ahead without Keller, who is leaving the company for "personal reasons."
"Intel appreciates Mr. Keller’s work over the past two years helping them continue advancing Intel’s product leadership and they wish him and his family all the best for the future. Intel is pleased to announce, however, that Mr. Keller has agreed to serve as a consultant for six months to assist with the transition," Intel said.
The retention of Keller as a consultant for six months strongly suggests there was nothing untoward that resulted in his resignation, which was not the case when former CEO Brian Krzanich left the company after acknowledging he had a "past consensual relationship" with another Intel employee, violating the company's non-fraternization policy. He was replaced by Bob Swan.
We sincerely hope everything is okay in Keller's world. According to WCCFTech, which posted an internal memo to employees on Keller's resignation, part of the reason was a desire to spend more time with his family. 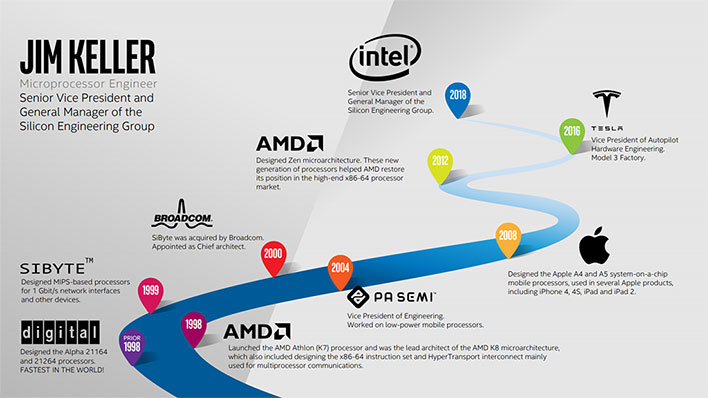 As industry analyst Patrick Moorhead noted on Twitter, Keller is a rockstar in the chip industry, with a history of taking on big projects and moving to the next thing after he feels the work is finished. Prior to joining Intel, Keller was the vice president of Tesla’s autopilot hardware, a position he held for two years as well. And before that, he led AMD's effort in designing the Zen microarchitecture, which spurred the company's resurgence back into relevance at the high end of the CPU market.
Keller had also previously worked for AMD in the late 1990s when the company launched its Athlon K7 processor line, and led the development of K8 (codenamed SledgeHammer), which was the first architecture to implement the AMD64 instruction set as an extension to x86.
A couple of other notable checkpoints along Keller's career path include Broadcom and Apple, the latter of which is where he designed the company's A4 and A5 SoC processors.
Keller's departure has prompted some promotions within Intel. Sundari Mitra, former CEO and founder of NetSpeed Systems, will lead a newly created IP engineering group; Gene Scuteri, an engineering leader, will head the Xeon and networking engineering group; Daaman Hejmadi, corporate vice president and general manager of the infrastructure and platforms solutions group, returns to lead the client engineering group focused on SoCs; and Navid Shahriari, who has been with Intel since 1989, will continue to lead the manufacturing and product engineering group.
Where this ultimately leaves Intel is anyone's guess. Intel is about to launch its 10-nanometer-based 11th generation Core "Tiger Lake" mobile processors to replace Ice Lake, and on the desktop, we are still waiting for 10nm to emerge. Meanwhile, AMD is on track to launch its Zen 3 architecture later this year, which is another iteration of 7nm.
Nodes between Intel and TSMC (which manufacturers AMD's chips) are not directly comparable, but even by Intel's own insinuated admission, AMD holds the process lead right now, in terms of technology. We will have to wait and see if Keller has put Intel on a path to regain process leadership.