In the immediate future, Intel will be rolling out its Rocket Lake processors, comprised of 11th Gen Core desktop CPUs. Then a little bit further down the road, we will get to see how Intel's hybrid design works out, with the eventual introduction of Alder Lake. What about after that? We've seen references to a Meteor Lake platform, and now another reference to Lunar Lake, which is likely destined for a 2023 or 2024 launch.

If you are keeping count, Lunar Lake would logically land within Intel's 14th Gen Core processor plans. That is assuming (A) Lunar Lake is real, and (B) Intel does not shake things up with something else in between, and/or get funky with its Gen labels. Now that Pat Gelsinger has taken the reins as Intel CEO, it is anyone's guess what the future might hold.
That said, the patch notes for a recent Linux-based Ethernet driver by Intel specifically mentions "Lunar Lake" gaining initial support. Here it is... 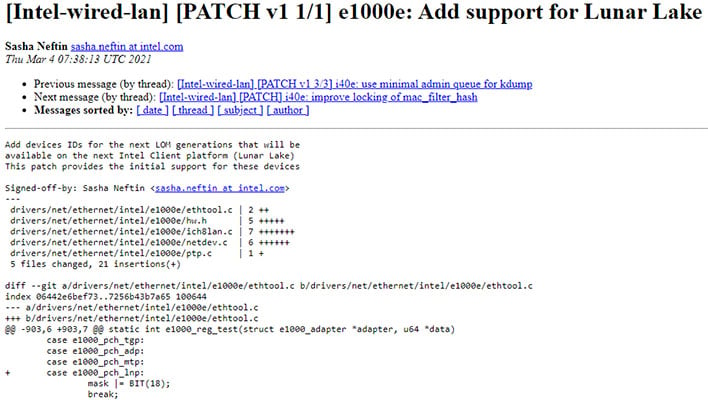 The driver itself is not the interesting part—it adds support for Lunar Lake CPUs with the Ethernet driver "e1000e," which is a 1Gbps NIC for Linux systems. Last October, a previous version of this Linux driver added support for Meteor Lake to the fold, according to those patch notes. What is potentially interesting, however, is what this means for Intel's roadmap.
Intel has some catching up to do with AMD, in terms of process technology. AMD is already cranking out a second round processors based on TSMC's 7-nanometer node, and when Zen 4 arrives either at the end of this year or early next year, it will transition to 5nm (with a rumored 25 percent IPC lift over Zen 3).

Meanwhile, Intel has struggled to move past 14nm in a big way. Rocket Lake will be another iteration of 14nm, while Alder Lake will finally bring Intel's desktop silicon into the 10nm fold, which is roughly equivalent to AMD's 7nm node (comparing nodes from two different manufacturers is a bit complex).
Last November, YouTube leaker Moore's Law is Dead posted some supposed information about Intel's future plans, saying Meteor Lake would see a shift to 7nm, and will be based on a new Redwood Cove architecture designed from the ground up to be node agnostic (meaning it could be manufactured at different fabs, including TSMC). It was also claimed that Meteor Lake is where Intel will catch up to AMD.
The leaker mentioned Lunar Lake as well, though cautioned against speculating too much about it, given how far off in the distance it remains. If you look around the web, the rumors are kind of all over the place. There's even mention of an Alder Lake Refresh called Raptor Lake replacing Lunar Lake. However, the Linux driver above seems to indicate that Lunar Lake is still in the plans.
Of course, Zen 4 is not the end of the road for AMD. Regardless of which company takes the lead in process nodes, the next several years should prove very interesting in the CPU space.