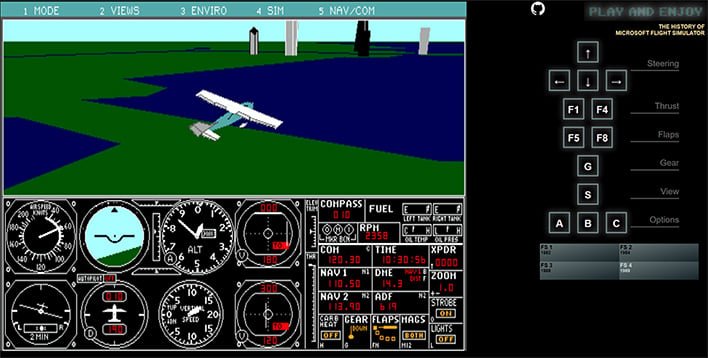 The latest iteration of Microsoft Flight Simulator is absolutely gorgeous (save for some funny rendering quirks), and also demanding, if you intend on running it at a high resolution. If you just do not have the hardware to the simulation justice, you can still get your flight fix by directing your browser to GitHub and playing one of the earlier versions.
Software engineer Sebastian Macke has made available the first four versions of Microsoft Flight Simulator, starting with the original 1.0 build for PC released in 1982. That build predates even The Simpson's, which would not land on television screens for another seven years. The cost of gas was just 91 cents back then (presumably more for airplane fuel) and E.T. was playing in movie theaters. Feel old yet?
The simulation is actually a little older than that, as it first arrived on the Apple II as FS1 Flight Simulator in 1979, then on the TRS-80 in 1980. Those builds are not playable as part of this GitHub project.
However, in addition to Flight Simulator 1.0 for PC, you can also play Flight Simulator 2.0 (1984), Flight Simulator 3 (1988), and Flight Simulator 4 (1989), all from within your browser. The image at the top of this article is a screenshot I took from Flight Simulator 4, running in Chrome, after a successful takeoff (and before stalling out and plummeting into the water).
The controls seem simple enough, but make no mistake, piloting a plane is no easy task. That holds true now just as it did in 1982. With a little practice, though, I was able to take to the skies and cruise for a bit without nose diving into the ground. 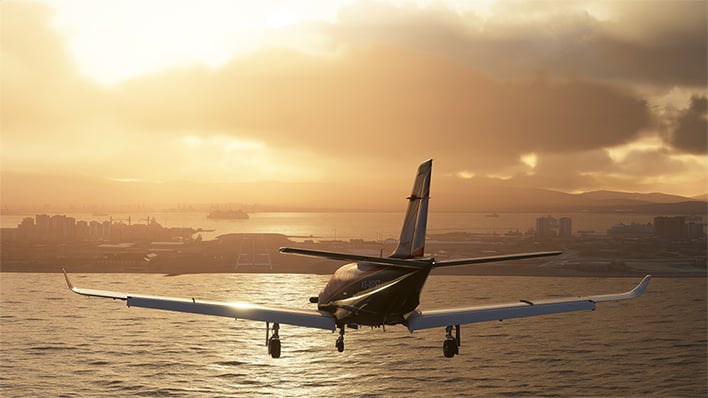 If for no other reason, it is working taking a quick trip back in time to the older versions, to fully appreciate how far graphics fidelity has come. The latest versions of Microsoft Flight Simulator, shown above, is leaps and bounds ahead of the earlier versions, while maintaining the same high level of realism that makes this one of the most beloved (and long running) simulations on the PC.
It's also anticipated to drive a massive surge in PC hardware spending. Analysts at Jon Peddie Research predict that Microsoft Flight Simulator alone will account for $2.6 billion in hardware upgrades over the next three years, counting both core components and peripherals, such as flight sticks.
To play the original versions, just visit the page on GitHub and start flying, scroll down, mash the 'Click to play' link. You can swap versions by clicking on your build of choice, right below the controls legend on the right-hand side.
Happy flying!