Qualcomm is tasting sweet redemption this week after a U.S. Appeals Court ruled in its favor regarding a Federal Trade Commission lawsuit alleging it had violated antitrust laws. At the center of the lawsuit was Qualcomm's licensing business, which is a huge source of revenue for the company (this revenue amounted to nearly $5 billion during 2019).

Qualcomm has long brokered licensing deals with companies like Samsung, Huawei, and Apple. The latter company was involved in a years-long fight with Qualcomm over wireless chip licensing (with Apple arguing that it was paying too much money per smartphone sold), but the two parties eventually settled last year and announced a new multi-year licensing/modem purchasing agreement to avoid a protracted legal battle.

“We decline to ascribe antitrust liability in these dynamic and rapidly changing technology markets without clearer proof of anticompetitive effect,” explained 9th district circuit judge Consuelo M. Callahan. Not only did the three-judge panel say that Qualcomm had not violated antitrust laws -- as originally prescribed by U.S. District Judge Lucy Koh in 2019 -- but it also rescinded the order that would require Qualcomm to renegotiate its licensing terms with existing customers. 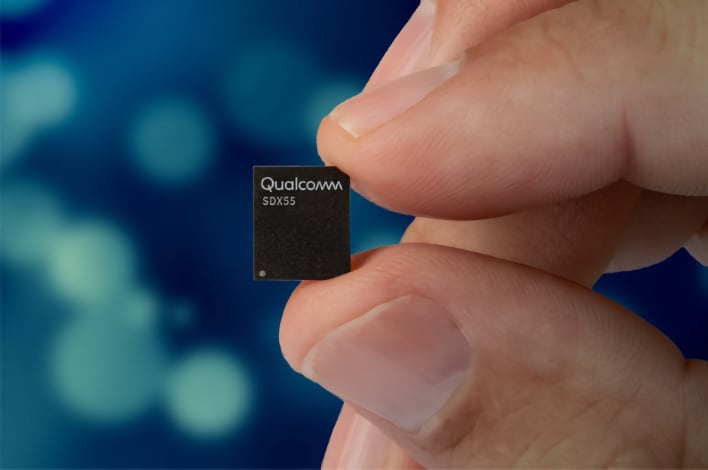 “The Court of Appeals unanimous reversal, entirely vacating the District Court decision, validates our business model and patent licensing program and underscores the tremendous contributions that Qualcomm has made to the industry,” said Qualcomm general counsel Don Rosenberg.

Not surprisingly, the FTC was less thrilled with the decision. “The court’s ruling is disappointing and we will be considering our options,” said Ian Conner, who serves as the agency's Bureau of Competition Director.

With the dark clouds not clearing overhead for Qualcomm, it rose roughly 2.3 percent to $108.83/share on Tuesday. As of this afternoon, QCOM is up nearly 5 percent to $113.66/share.

Qualcomm is the leading provider of SoCs that power Android smartphones -- i.e. Snapdragon 865, Snapdragon 765G -- and it also produces wireless chips that deliver 4G LTE and 5G connectivity. Even Apple, which makes its own SoCs for iPhones like the A13 Bionic, has relied on Qualcomm 4G LTE modems in the past. It tried to branch out to Intel-sourced 4G LTE modems to avoid Qualcomm licensing fees in the past, but that led to the start of the legal war between the two companies. Now that they have settled, Apple's upcoming iPhone 12 family is widely expected to use Qualcomm's Snapdragon X55 5G modem.