Without a doubt, this has been one of the worst years for gamers, in terms of being able to buy hardware. It doesn't matter if you're a PC gamer or a console gamer, the hardware for your platform of choice has been affected by a silicon shortage, scalpers, and other factors. As it pertains to the console side, the Xbox Series X/S and PlayStation 5 have been tremendously difficult to find in stock, and now the same is true of last-gen systems.
Don't believe it? Head over to Best Buy and search for an Xbox One, Xbox One S, Xbox One X, PlayStation 4, or PlayStation 4 Pro. Here is a sample of what you will see...

Once you have struck out, head over to Walmart and look up the same consoles. You will get the same results, save for marketplace sellers looking to hawk both new and refurbished systems at inflated prices. For example, there is a listing for an Xbox One S with 1TB of storage for $557.75. In normal times, that SKU would go for $299, or less if catching it on sale.
Have a look... 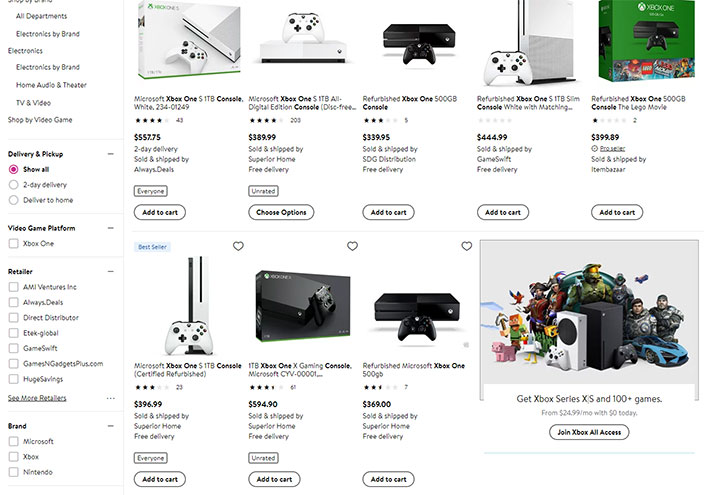 Nobody should be paying these prices for last-gen hardware, not when the Xbox Series X sells for $499 and the Xbox Series S for $299. Well, in normal times they would sell for those amounts. But to pay more for an Xbox One S than it is supposed to cost for an Xbox Series X is a terrible proposition, and another sign of the times we find ourselves in.
It's not just Best Buy and Walmart that are out of stock of reasonably priced consoles, either. Same goes for Amazon, Target, and others. At least at GameStop, you can still buy a refurbished or pre-owned system at a somewhat fair price (we saw a few in stock at the time of this writing, but even those sell out quickly, with one of the listings showing just a single unit in stock), but you'd be hard pressed to find a new console in stock.
It's very possible that part of the reason for the supply woes is because the focus from Microsoft and Sony (and by extension, their retail partners) has shifted to the latest generation hardware. But if not directly a result of the global silicon shortage, it is certainly having an indirect impact on supply. If people were able to buy a PS5, Xbox One X, or even a graphics card for their PC, there would probably be less demand for PS4 and Xbox One units.
At this point, however, gamers will get their fix however they can. And unfortunately, if you're not already set up for playing games, you might have a tough time getting back into the fray, at least until things settle down. Here's hoping 2022 brings with it a return to normalcy (or at least some semblance of it).