US President Joe Biden is doubling down on his administration's support in favor of consumers having a right to repair their electronics. Going a step further, his remarks also seem to suggest he is taking credit for Apple and Microsoft recently adopting policies that are more friendly towards the growing right-to-repair movement.
His latest remarks follow an executive order he signed last year, which instructed the Federal Trade Commission (FTC) to write up rules in favor of right-to-repair policies. Two weeks later, the FTC voted unanimously to support Biden's executive order, noting it has a "range of tools" at its disposal to "root out unlawful repair restrictions."
"The right to repair—sounds kind of silly saying it that way, but it’s—but we call it the right to repair—is literal. Too many areas, if you don’t own a product—excuse me, if you own a product, from a smartphone to a tractor, you don’t have the freedom to choose how or where to repair that item you purchased," Biden said this week.
President Biden criticized some industry efforts to curb do-it-yourself repairs, such as disabling features and voiding warranties when attempting to fix a device outside of an authorized facility. He further noted that denying right-to-repair policies ultimately raises prices for consumers, and makes it more difficult for independent repair shops to compete.
"And—excuse me—what’s happened was a lot of these companies said, 'You’re right. We’re going to voluntarily do it. You don’t have to order us to do it'. And voluntarily said, 'We’ll do it'. For example, Apple and Microsoft are changing their policies so folks will be able to repair their phones and laptops themselves—although I’m not sure I know how to do that," President Biden said. 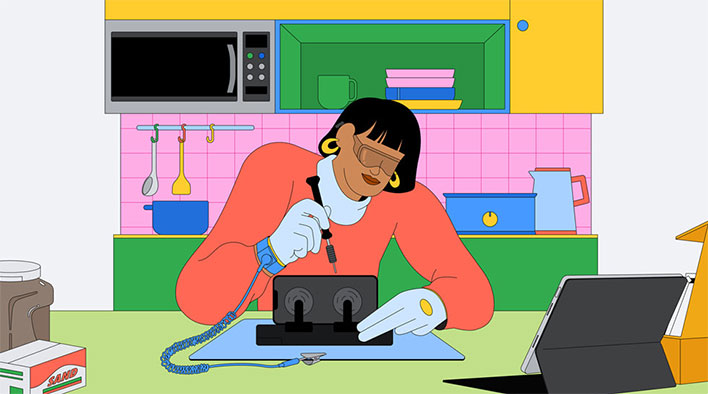 Whether spurred by the executive order in July 2021 and the FTC's subsequent 5-0 vote in favor of it or not, both Microsoft and Apple did announce more friendly DIY repair policies months later. Last October, shareholder advocacy group As You Sow announced that Microsoft had agreed to its proposal to increase consumer options to repair devices by the end of 2022. Then in November, Apple unveiled a Self Service Repair program that will "allow customers who are comfortable with completing their own repairs access to Apple genuine parts and tools."
"[Right to repair] is going to make it easier for millions of Americans to repair their electronics instead of paying an arm and a leg to repair or just throwing the device out," President Biden added.
The Biden Administration has repeatedly framed right-to-repair legislation as being pro-competition, and his latest remarks reiterate that stance. During his speech, he cited a study from NYU claiming the combination of higher prices, lower wages, and lack of competition costs the media American family $5,000 each year.