On the supplier side, the NAND flash memory market is in a bit of shambles at the moment, and has been for the past several months (or even longer). What this means for the average consumer is that prices on solid state drives (SSDs) will continue to fall throughout the rest of 2022. There are already enticing deals to be had on storage, and they will only get better (just in time for next-gen PCIe 5 models to hit the market).

That's provided the analysts at TrendForce are accurate in their assessment and predictions. If they are, suppliers will see NAND flash memory sales "cross over into loss territory" by the end of this year.
"NAND flash [memory] is currently oversupplied. Buyers started focusing on destocking and greatly reducing purchases in 2H22 while sellers began offering rock-bottom prices to shore up purchase orders, causing wafer pricing to drop by 30-35 percent in 3Q22," TrendForce says.
According to TrendForce, demand remains weak even as factory inventories increased, which will push both client and enterprise SSD prices down anywhere from 15-20 percent in the fourth quarter of this year. Even at the low end of the forecast, we're looking at a fairly significant price drop. This could also spill into the beginning of next year.
"In terms of client SSDs, since purchasing demand in 2H22 is far less than that in 1H22, PC brands currently feel pessimistic regarding demand next year and reducing inventory is a top priority, causing suppliers to increase client SSD price flexibility to surge shipments," TrendForce notes.
In other words, PC makers are reluctant to stock up on SSD storage products for fear of being stuck with unsold inventory. This is forcing NAND flash memory suppliers to be more flexible with their pricing, in particular as it applies to 512GB capacity solutions.
While suppliers may not be thrilled with the situation, consumers now have access to some fantastic SSD deals. Waiting a few weeks could net even better bargains (especially with Black Friday and Cyber Monday looming), but for anyone who doesn't want to wait, there are plenty of bang-for-buck options out there. Here are some of them... 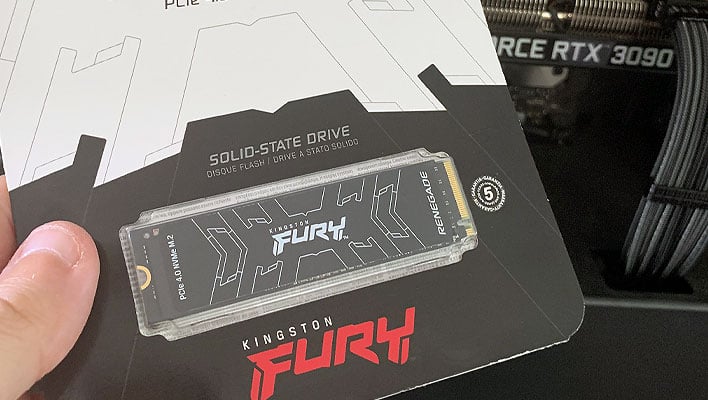 Generally speaking, you can find a reasonably fast 1TB SSD for around $100. Even some of the fastest PCIe 4 models on the market that top 7,000 MB/s don't cost a whole lot more, like Kingston's Fury Renegade (though most hover around $130 to $150).
If the pricing forecast holds true, we could potentially see high-speed PCIe 4 SSDs at the 1TB capacity sell for around $80 in the coming weeks. Not only is that great news for PC users, but also console gamers, given that it's pretty easy to upgrade the PS5's storage—see our guide on how to upgrade your PS5 with a fast SSD for step-by-step instructions.