PS5 And Xbox Series X Restock Tipped In Black Friday Leak, Here's Where And When

If you on the hunt for one of Microsoft's  or Sony's latest consoles for someone in your life this holiday season, you might be in luck. Black Friday and subsequent weeks of holiday-related deals are looming and both Xbox Series X|S and PlayStation 5 restocks are coming soon.

In late October, we ran down some leads on Xbox and PlayStation console drops which should still be on the way. However, it seems there is more to the story than we initially thought, as Walmart’s Black Friday ad has leaked with some interesting info. In a multi-day "dealebration" (deal-celebration) called “Black Friday Deals for Days,” both PlayStations and Xboxes will be available online only beginning on November 22nd. 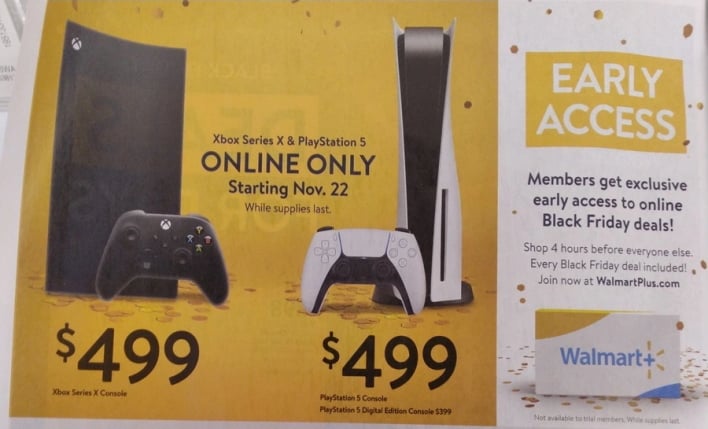 The only catch to this is scalpers will likely pounce and scoop up many of the consoles when they drop. Thankfully, if you are hard-pressed to get an Xbox or PS5, you can sign up for the Walmart+ membership to get four hours of early access to the deals, including said consoles. The hope is that scalpers are less likely to purchase this subscription, even though the service only costs $12.95 a month.

In any event, it sounds like stock of current-gen consoles might be making a rebound, but you will most certainly have to keep your eye out for the drops. However, if you want to be guaranteed a console, you could also look at the incredibly gaudy Gucci Xbox due to be released on November 19th, provided the $10k price tag doesn’t scare you off. Either way, we wish you the best of luck in the console hunt, and let us know if you score one in the comments below.