Ridiculously Tacky Gucci Xbox Costs Just $10K, Reminding You That Scalpers Can Be Ballers Too

If you have a spare $10K laying around, and you have a love for both Gucci and Xbox, this may be the moment you have been waiting for all your life. Or, if you are one of those unscrupulous eBay scalpers, this humorous and absurd money-grab may be right up your alley.

Gucci is celebrating its founding father Guccio Gucci, and its 100 year anniversary. So, it made absolute sense to call up Xbox since it is celebrating its 20th anniversary and ask, "Hey, do you want to create a tacky and outrageously-expensive collaboration and celebrate together?" And of course the Microsoft Xbox team apparently said yes (I mean it is Gucci after all).

The two worked out the details and came up with the Xbox by Gucci. It is comprised of 100 numbered sets, each of which contain a GG patterned laser etched Xbox Series X, two custom Xbox wireless controllers, all housed in a hard case by none other than Gucci itself. The case's design is meant to recall the vintage luggage with the red and blue stripes as a subtle reference to the House's origin. 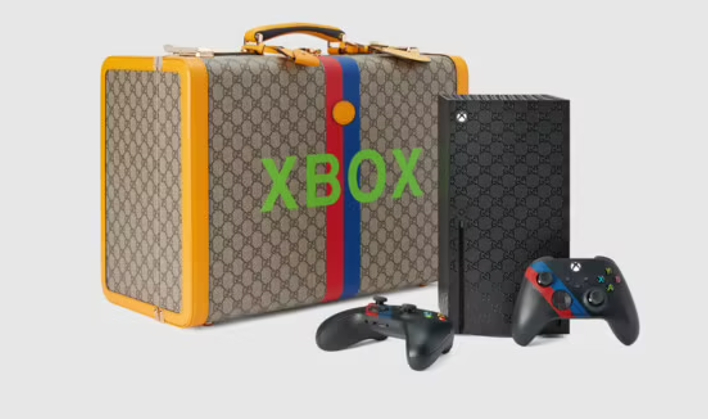 If you peer at the bottom of the hard case you will find the words "Good Game," motto that can be shared between the two companies. On the Gucci side, GG stands for Guccio Gucci himself, and for Xbox it is as Gucci puts it, "...the acronym of this formula, used sportingly by gamers as a way of signing off at the end of online multiplayer contests". Indeed Gucci and Xbox, GG to you both but this is kind of nutty at the asking price.

But wait, there's more! Along with the extremely limited items you will be receiving Xbox Game Pass Ultimate. Although it is not certain how many months of service it includes. So no need to fear about not having any games to play with your laser etched Xbox Series X. You will be provided with a library of well over 100 games to get you started. We are guessing that if you can afford this luxurious set up, you can certainly afford the $14.99 a month to keep Game Pass each month.

It will be interesting to see who ends up with the 100 sets of Gucci and Xbox history once they go on sale on November 19th. There will certainly be those who simply love both companies/products and want to own the collaboration. There will be others who will want it as a status symbol, and of course there will be the lowly scalpers who are hoping to make a profit even more. To all who do end up owning one of these, we at HotHardware simply say, GG! You're obviously sporting some seriously disposable income.