As SpaceX celebrates launching its 2,000th Starlink satellite into space, astronomers are not as ecstatic about it. It seems all those satellites have began photobombing some astronomical observations.

Last week SpaceX launched 105 satellites from consumers in twenty different nations, including CubeSats, microsats, PocketQubes, and orbital transfer vehicles. This week SpaceX launched 49 of its own Starlink satellites, bringing the total number launched over 2000. However, as Elon Musk pointed out on Twitter, only 1469 of those are still active. The number of Starlink satellites orbiting Earth has astronomers concerned that as more go up, more will begin leaving their mark in astronomical observations.

In a study released on January 14, a group of researchers say that the growing number of Starlink satellites causes "concern about an impact of low-Earth-orbit (LEO) satellite constellations on ground-based astronomical, in particular, on wide-field surveys in the optical and infrared."

The issue the satellites are presenting is that they show up as straight-line streaks across images of the night sky when the ZTF's exposures pick up a Starlink satellite moving along its orbital path. As of right now, researchers are saying they don't expect Starlink satellites to affect non-twilight images, but if the satellite constellation of other companies goes into higher orbits, that it could begin causing issues for non-twilight observations as well.

The research, published in The Astrophysical Journal Letters, analyzed the archival ZTF observations that were collected between November 2019 and September 2021. It found that 5301 satellite streaks could be attributed to Starlink satellites. As more satellites go up, the more streaks that are found. The fraction of streaked images that were taken during twilight has increased from less than 0.5% in late 2019 to 18% in August 2021. Research estimates that once the Starlink constellation reaches it targeted 10,000, that essentially all ZTF images taken during twilight could be affected. 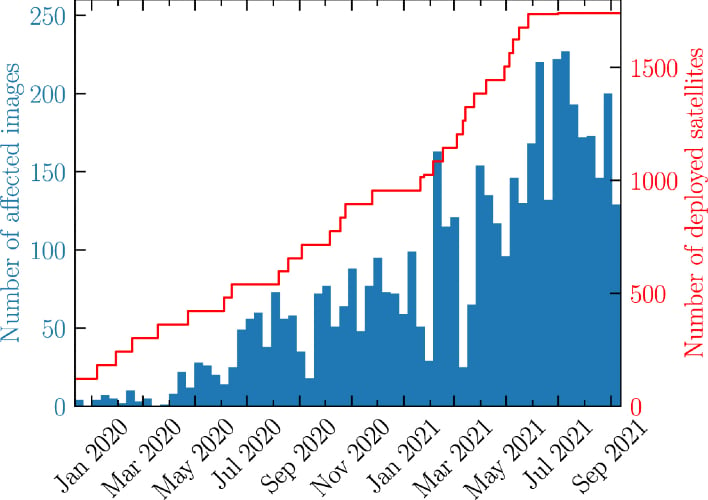 In the research paper it states, "Since LEO satellite trails disproportionately affect twilight and high-air-mass observations (in particular, the ZTF Twilight Survey), their impact is largest on the solar system science cases, such as the search for and follow-up of comets, asteroids, NEOs, and interstellar asteroids. Satellite trails may also disrupt time-critical observations of rare transient phenomena, such as gravitational wave triggers by LIGO and Virgo, gamma-ray bursts, or neutrino counterparts. However, the probability that the optical transient is missed due to a satellite trail is currently small (less than 0.04%)."

Research co-author Tom Prince, an emeritus professor of physics at Caltech, is optimistic that software could help lessen problems through coordination between astronomers and SpaceX, which is a solution Elon Musk and his company have also suggested. It is possible that software could also be utilized to reduce or mask the impact of the streaks in images after the fact as well.

SpaceX has attempted to take measures in order to reduce the satellites visibility from Earth bound observations. It redesigned Starlink satellites with an experimental coating to make it less reflective, however this led to thermal issues and had to be abandoned. More recently, satellites have included visors to block sunlight from reflecting from the parts of the satellite. The use of visors is an attempt to reduce the brightness of satellites in operational orbit. Research indicated that satellites using visors are dimmer, but are still brighter than what SATCON1 workshop recommends.


While the satellites with visors may reduce the visibility, there are concerns that upcoming next-generation sky surveys like the Vera C. Rubin Observatory in Chile will be more negatively impacted. And with SpaceX suggesting that it could grow its Starlink constellation by up to 20 times its current size or more, the need for better solutions will surely be needed.
Top Image Source: Caltech Optical Observatories/PAC