Intel is about to bring PCI Express 5.0 into consumer homes with the launch of Alder Lake and its accompanying Z690 chipset, but what about actual products that can tap into the extra bandwidth the upcoming platform provides? Phison is on it. The controller maker sent us a note today announcing it is working on customizable PCIe 5.0 SSD solutions for enterprise and client products alike.
The main attraction of the PCIe 5.0 standard is that it once again doubles the bandwidth compared to the previous generation (PCIe 4.0). It takes some time for device makers to really leverage the fatter lanes, and as it stands, the PCIe bus is not really a bottleneck for graphics, even with high-end gaming thrown into the mix.
Storage products, on the other hand, are somewhat of a different story. Today's fastest SSDs push speeds to 7,000MB/s and even a bit beyond. To put that into perspective, it was not all that long ago when SATA SSDs were the norm, with the fastest models typically topping out at around 550MB/s to 580MB/s. We've come a long way.
Those are actually still fast for the general public, by the way. Whether it's just navigating around Windows or playing games, a SATA SSD will still make your PC feel fast compared to the days when HDDs were the norm (for primary storage). But for slinging big pools of data around, SSDs that hitch a ride on the PCIe bus offer much faster speeds and performance. And they're going to get even faster.
Let's do some quick and dirty math. PCIe 4.0 offers around 16Gb/s per lane, or around 2GB/s of bandwidth. NVMe operates on a x4 link, so that around 8GB/s (the actual number is closer to 7.88GB/s). So today's best performing SSDs are coming close to saturating the bus, many of which are powered by Phison's PS5018-E18 controller, which supports sequential read and write speeds of up to 7,400MB/s and 7,000MB/s, respectively.

PCI Express 5.0 Paves The Way For Even Faster SSDs 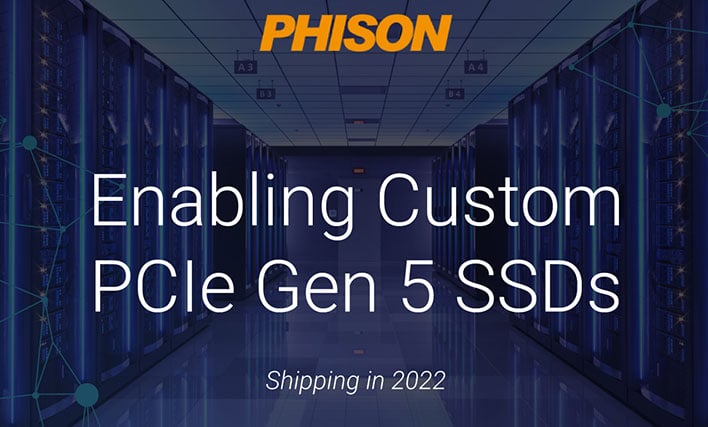 Get ready for a higher ceiling. The data rate specification for PCIe 5.0 is 32Gb/s, which is twice that of PCIe 4.0. That works out to around 16GB/s (the actual figure will be a little less) for a NVMe SSD, in terms of the theoretical maximum.
It remains to be seen what we'll see at the outset. That said, Phison is actively developing its first PCIe Gen5 platform, which it is calling the E26 series. It's not clear what speeds will look like right out of the gate, but it's a safe bet they will be faster than what we are seeing right now.
That's exciting from a geek standpoint. The reality is, most consumers are not coming anywhere close to leveraging the bandwidth capabilities of PCIe 4.0 SSDs, and that's not going to change in the short term. Even so, however, the technologies are in place—Microsoft's DirectStorage API gives a path for game developers to leverage faster storage speeds than they have been, Alder Lake will bring PCIe 5.0 into the mainstream, and now Phison is doing its part.
Then there is the data center, where faster speeds are always welcome.

"While PCIe Gen4 SSD shipments are still ramping up, there are many server and storage customers who will want to transition to PCIe Gen5 as soon as that technology is available," said Jeff Janukowicz, Research Vice President at IDC. "By helping to enable an ecosystem, Phison’s customizable E26 SSD is at the forefront of PCIe Gen5 introductions and will facilitate data center customers looking to benefit from the technology's increased performance."
Phison says it has taped out it latest E26 Gen5 test chip, which is manufactured on a 12-nanometer node. As for when it will manifest in actual products, the company anticipates customized SSD solutions powered by its E26 controller to ship in the second half of next year.