Slowly but surely, memory makers have begun announcing DDR5 memory kits for Intel's Alder Lake platform. Most of them have been relatively modest in speed, at or around DDR5-4800. Meanwhile, G.Skill is doing what it does—focusing on enthusiast kits and seeing how far it can push its own memory products. The best stable result so far without resorting to exotic cooling is DDR5-7000.
G.Skill achieved the "extreme speed" result on a 32GB kit of Trident Z5 RGB memory, comprised of a pair of 16GB modules. Equally impressive, it was able to hit DDR5-7000 with relatively tight timings (for the speed), assuming it was using its DDR5-6400 kit that we wrote about a couple weeks ago. That kit qualifies as the fastest DDR5 memory launched to date.
There are two versions—one that runs at 40-40-40-76 timings and another that runs tighter at 36-36-36-76. G.Skill didn't specific which version it used, but did note that it hit DDR5-7000 with the timings set at 40-40-40-76.
Those are high by DDR4 standards, but pretty good in the realm of DDR5, where faster frequencies come at the expense of looser timings.
"7000MT/s memory speed is an exciting milestone, as it was only seen under liquid nitrogen sub-zero temperature cooling not long ago in overclocking records. Accomplished with high-performance Samsung DDR5 components, this extreme speed memory is truly worthy of the G.Skill flagship Trident Z5 family classification," G.Skill says. 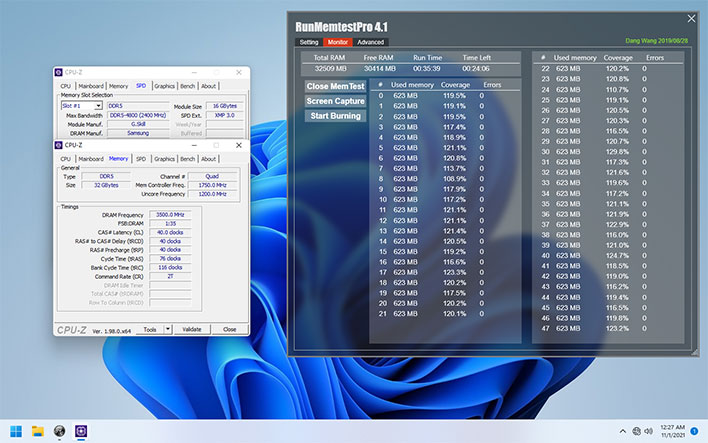 This wasn't just a matter of hitting DDR5-7000 and shutting down, either. G.Skill says the 7,000MT/s data rate proved to stable in Memtest.
G.Skill called this an "incredibly milestone" while deservedly patting itself on the back. It remains to be seen how well Alder Lake responds to increasingly higher data rates in RAM, and whether or not there is a meaningful impact on performance from using DDR5 compared to DDR4 (Alder Lake supports both). But in the meantime, we certainly applaud G.Skill's efforts.