Late last month, the OnePlus Nord 2 was announced as a feature-packed mid-range phone with a compelling price tag. The smartphone features a MediaTek Dimensity 1200-AI SoC, a 6.43-inch Full HD OLED 90Hz display, 8GB of RAM, and 128GB of storage.

Also in the mix is a 4,500 mAh battery that supports Warp Charge 65 fast charging. Unfortunately, it's the battery that is causing issues for one unlucky new OnePlus Nord 2 owner. According to Ankur Sharma's post on Twitter, his wife was out for a bike ride carrying her 5-day-old Nord 2 in a sling. Then, out of nowhere, the phone seemingly exploded, and smoke started billowing from the sling. 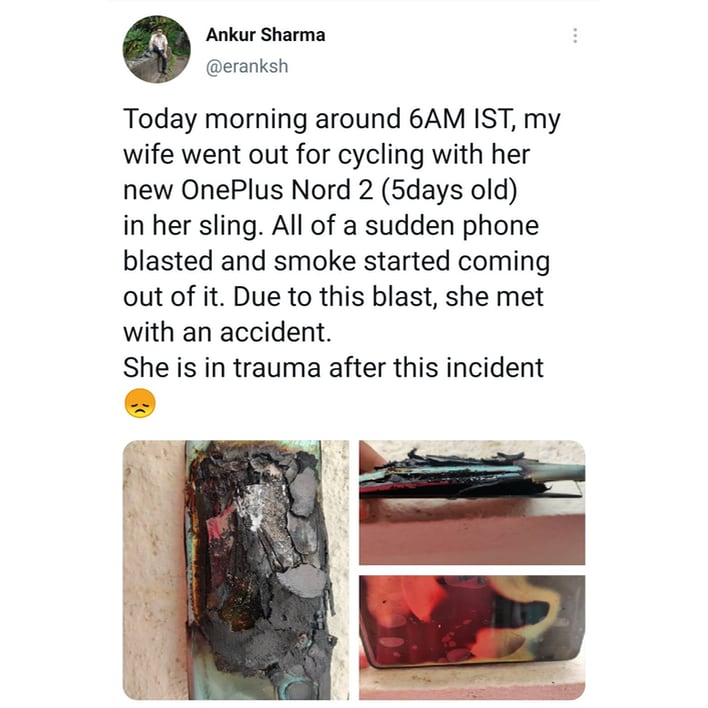 Sharma posted images of the charred smartphone to Twitter, which garnered quite a lot of attention. A Reddit thread discussing the incident already swelled to over 300 comments as people debate the extent of the injuries that Sharma's wife experienced and whether a recall will be issued for the Nord 2, as was the case with the infamous Samsung Galaxy Note 7.

For its part, OnePlus was very sick to issue a public apology regarding the fiery incident.

OnePlus asked Sharma to get in contact via direct message to discuss the issue further. Unfortunately, not long after, the original tweet that sparked the discussion was deleted. OnePlus and Sharma likely came to some sort of agreement that hinged on the post being taken down. Whether that means some financial compensation or perhaps just a replacement phone is unknown at this time, but the original tweet is still available to view, thanks to screenshots.

We'd be interested in seeing what OnePlus can learn from analyzing the device if it can obtain it from the original owner. Hopefully, it's just an isolated incident and won't be joined by repeated flare-ups, as was the case with the Galaxy Note 7.

It should come as no surprise that OnePlus was quick to get ahead of this incident. The company is already walking on thin ice after it was revealed last month that it was throttling performance on OnePlus 9 and OnePlus 9 Pro smartphones without first informing customers.