One of the interesting features of the camera for the OnePlus 8 Pro is the Photocrom color mode. The mode allows the smartphone's infrared camera to see through certain materials, such as black plastic, to give a glimpse at what electronics and other devices look like inside. As cool as that function was for peering inside of electronic devices, details soon surfaced that the mode could also allow people to look through some thin black clothing. The ability to see through clothing led OnePlus to issue a software update intended to eliminate the filter in the Chinese market Hydrogen OS. However, when the software update rolled out, it removed the feature for users in other countries, which OnePlus had promised it wouldn't do.

For those unfamiliar with why the filter is being removed, when reports surfaced highlighting the ability to see through some clothing, OnePlus announced that it would temporarily disable the Photocrom filter in its Oxygen OS via a software update. The company said at the time the move was to mitigate any potential user privacy issues under what it called "extreme circumstances." Essentially, the company didn't want creepers trying to see through people's clothes using the camera filter. 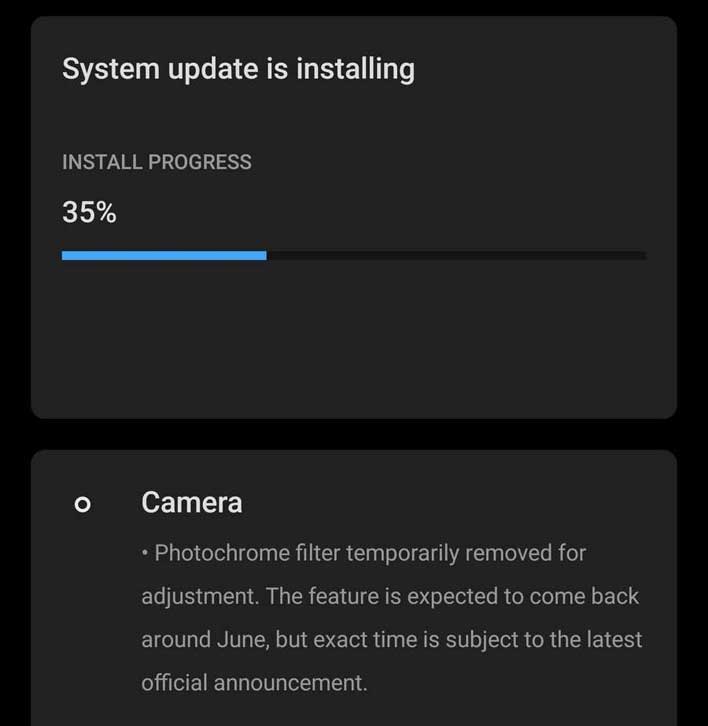 The screenshot above is from our OnePlus 8 Pro. It shows the update is being applied to at least some devices in the United States. It has only one item in the update notes stating, "Photochrome filter temporarily removed for adjustment." Note that the "e" at the end of "Photochrom" is how it's spelled in the update. The text says the camera filter is expected to come back in an update sometime in June.

Once the update is applied, the Photochrom filter is no longer in filter options for the smartphone's camera app. As for why the update was rolled out to devices on the global market after OnePlus promised it wouldn't be, the company has said that the OTA "inadvertently" went out to a limited number of devices. OxygenOS devices that applied the update will have the filter re-enabled in a future OTA, returning the camera's ability to see through electronic devices. The offending update has been removed from the Oxygen Updater as of this publication.