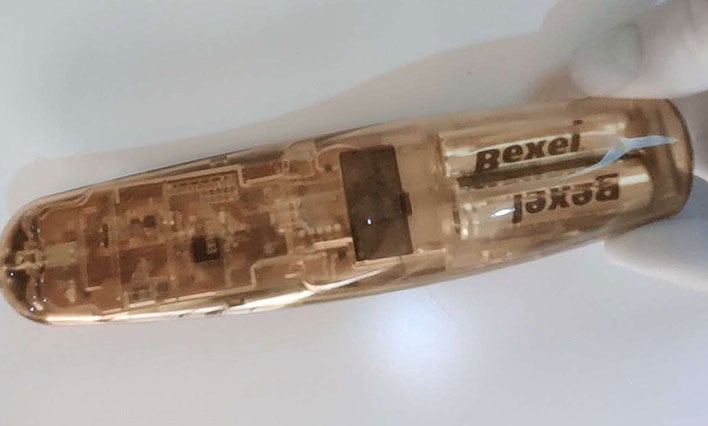 For the time being, OnePlus is disabling the "Color Filter" on its OnePlus 8 Pro handset through an over-the-air software update. The decision to turn the feature off came after the phone's ability to see through certain objects came to light, giving it a sort of x-ray vision effect. While certainly neat, there are some privacy implications that come with that ability.
In case you missed our previous coverage, the OnePlus 8 Pro's Color Filter uses a Photochrome mode on the handset to take infrared photography. This is what allowed it to penetrate certain objects—in the photo above, for example, we took a picture of an LG remote control using the Color Filter. As you can see, it was able to peek through the black plastic casing and display the battery and electronics inside.
It is a pretty neat effect for sure, but also one that can potentially be used for nefarious purposes. In our testing, the phone was indeed able to see through black clothes if they are thin enough, which certainly adds a creepy angle to the feature. We did not test this ability in-depth, but that it even works on some clothing is problematic.

"In order to eliminate the impact on user privacy under possible extreme circumstances and eliminate everyone ’s concerns, we decided to temporarily disable the filter function through software upgrades. We will Push within one week," OnePlus announced (translated).
For anyone who is bummed about this, OnePlus says it is exploring "technical solutions" to bring the feature back, without the privacy implications. We're not sure how exactly it can go about that, but it comes with the promise of re-launching the Color Filter sometime down the road.