OnePlus 8 Pro Infrared Cameras Have X-Ray Vision Mode, See What It Can Do 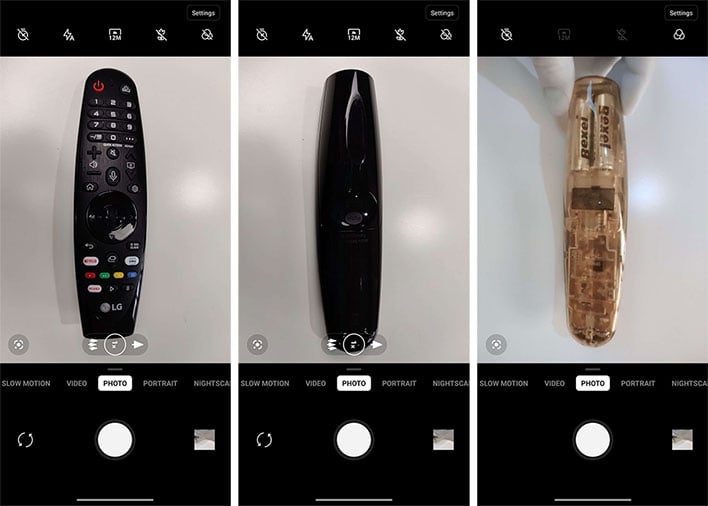 The OnePlus 8 Pro is a fantastic smartphone from top to bottom, with its 120Hz OLED display, fast Snapdragon 865 processor paired with 12GB of RAM, great build quality and ergonomics, and exceptional camera performance. Oh, and it can see through plastic objects as well. That's right, the OnePlus 8 Pro boasts a bit of x-ray vision.
We were not aware of this initially, until a user on Reddit posed the question about the potential capability, based on what they were told by a friend.
"One of my friends claimed that the [OnePlus 8 Pro's] color filter sensor is able to see through a thin layer of plastic to see the electronic components behind it? Can anyone with the phone validate this claim for me?," the user asked.
The friend was not blowing smoke up the poster's backside. We tried it out ourselves, and as you can see in the image at the top of this article, our OnePlus 8 Pro can indeed 'see' through some types of black plastic. Using an LG remote control as our subject, the OnePlus 8 Pro worked its x-ray mojo to display the two AA batteries and electronics sitting underneath the plastic casing.
There are plenty of other examples on the web as well, including a fellow who aimed the OnePlus 8 Pro at a pair of Oculus Quest controllers...

The magic you see in the embedded Twitter video above is done through the phone's 5-megapixel "Color Filter Camera," which is one of four camera sensors on the back of the phone. For this to work, it seems the IR filter is disabled so that it is not filtering light, which allows it to have a sort of x-ray effect on certain objects.
Here is another example, this time on an Apple TV box...
Pretty wild stuff. We should also note that it can see through black clothes too, if they are thin enough, which adds a creepy angle to this, sort of like those old 'X-Ray Specs' ads that used to run in comic books. For just a buck (plus a quarter for shipping), the ads promised "loads of laughs an fun parties," with a drawing of a dude peering through a woman's clothing.
Fortunately, those dollar goggles didn't actually allow for that, and as far as we know (and hope), neither does the OnePlus 8 Pro. But for peering through some types of black plastic to see the internal workings of everyday items, this is still pretty neat.