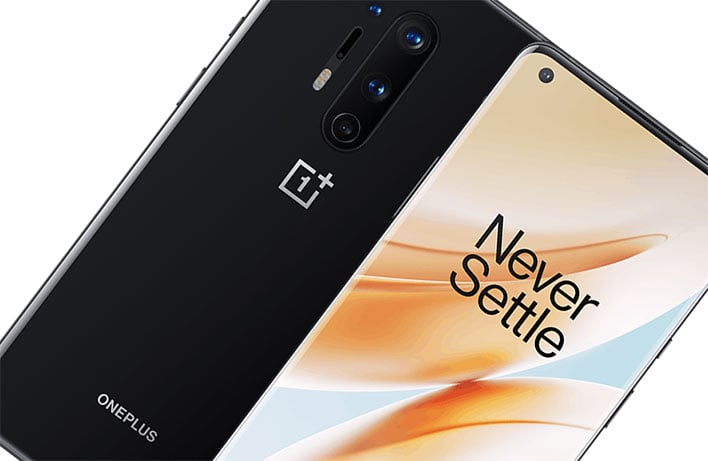 The launch of the OnePlus 8 Pro is getting off to a bit of a rocky start. On paper, it's certainly a worthy successor to previous OnePlus handsets, and is priced competitively for a premium phone. However, display and compatibility woes have marred the release. As it pertains to the latter, apparently the OnePlus 8 Pro has not yet been fully validated for Verizon's wireless network.
OnePlus 8 Pro owners have posted various complaints on the OnePlus forums, in regards to getting their handsets working correctly on Verizon's network. Some claim they are having trouble sending and receiving SMS text messages, while others say they are unable to make or receive phone calls. So, what's going on?
The folks at Android Police reached out to OnePlus about the complaints and found out the company still needs to submit more information to Verizon, in order to validate the OnePlus 8 Pro for use on the wireless carrier's network.
"Our OnePlus 8 series open market phones in North America will not be compatible with Verizon until June at the latest. The OnePlus 8 purchased through Verizon will be certified immediate," OnePlus told the site.
It's not entirely clear what information needs to be submitted, though according to some Verizon customers, OnePlus still needs to submit a list of OnePlus 8 Pro and OnePlus 8 IMEIs, or International Mobile Equipment Identities. Verizon needs that information in order to whitelist the devices on its network.
While certainly frustrating for affected users, the good news here is that it doesn't appear to be a hardware issue—it's a matter of OnePlus needing to cross its 'T's and dot its 'I's. The bad news is, this could take until June, presumably because of the Coronavirus pandemic.
The other issue has to do with the display. Some users have noticed low brightness irregularities and green tint issues, among other complaints. OnePlus said it will roll out an over-the-air update that will address these problems.
Issues aside, the OnePlus 8 Pro remains an intriguing handset. It sports a 6.78-inch AMOLED display with a 3168x1440 resolution and 120Hz refresh rate, Qualcomm Snapdragon 865 processor with an X55 modem for 5G connectivity, 8GB of 12GB of LPDDR5 RAM, 128GB or 256GB of UFS 3.0 storage, a 16MP front camera, and four rear cameras (48MP main, 8MP telephoto, 48MP ultra-wide angle, 5MP color filter) with dual LED flash.