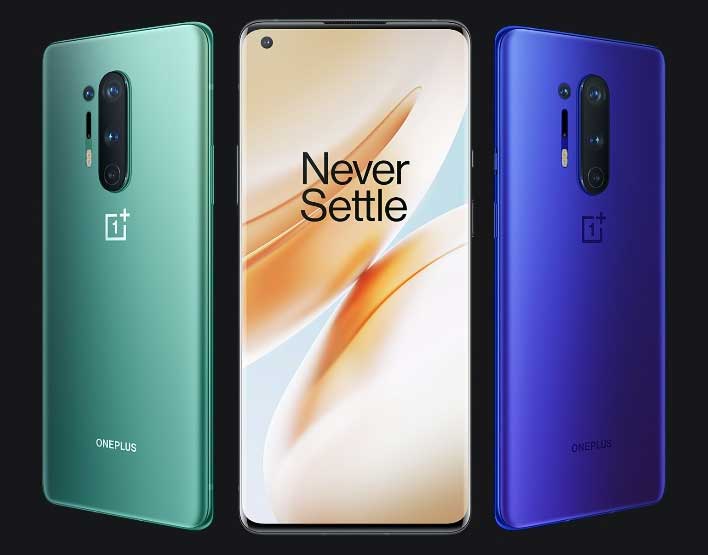 OnePlus 8 Pro preorders are starting to arrive ahead of the official launch at retail stores on April 29th. Some who received the device early are already complaining that there are screen issues with the high-end smartphone. Among the screen issues that have been plaguing owners are crushed/clipped blacks, low brightness irregularities, "green-tint" issues, image retention, and lines appearing around the punch-hole camera cutout.

OnePlus is already promising that a fix is coming, as it is aware of the issues. Some of the problems, like brightness uniformity, are typical for all OLED smartphones. Problems with crushed/clipped black colors are expected be fixable with software. Some owners are having issues with image retention and dark horizontal lines across the screen, level with the display camera cutout.

Some users are seeing areas of the screen that are much brighter than others. The green-tint issue, in some cases, almost looks as if ink was poured out on the screen. Some who receive the device early say that the screen issues change depending on display settings, like resolution and refresh rate. A number of owners report that lower or non-adaptive settings reduce the visibility of the screen issues in some cases.

OnePlus said that it values user feedback and plans to deliver the best smartphone experience. Its team is investigating the issues and will release updates as soon as they're ready. It has promised that the green-tint problem will be fixed in the next OTA, and the device maker plans to roll out an update in May to correct the crushed/clipped blacks issue. Unfortunately, OnePlus hasn't mentioned anything about fixing display uniformity issues with low brightness or with dark themes at night. Those issues may be chalked up to how OLED panels operate, leaving users to live with the uniformity issues. The OnePlus 8 and OnePlus 8 Pro were announced earlier this month starting at $699.