NZXT is gearing up for Intel's 13th Gen Raptor Lake CPUs with a new N7 Z790 motherboard that is dressed to the nines. As the model name implies, the latest entry in NZXT's small but growing motherboard lineup is based on Intel's flagship Z790 chipset. And as we've seen from NZXT in past releases, the N7 Z790 comes with a choice in wardrobe, both of which look stunning.
Visually, this full cover dressing is what separates NZXT's offerings from most other motherboards. Buyers can choose between black or white color schemes, the latter of which results in a mix of mostly white and some black rather than all-white.
"The N7 series of motherboards provide a centerpiece for you to build the PC of your dreams. Housed in a clean metal cover, the N7 easily blends into your NZXT H series case and features smartly placed ports to make building simple," NZXT explains. 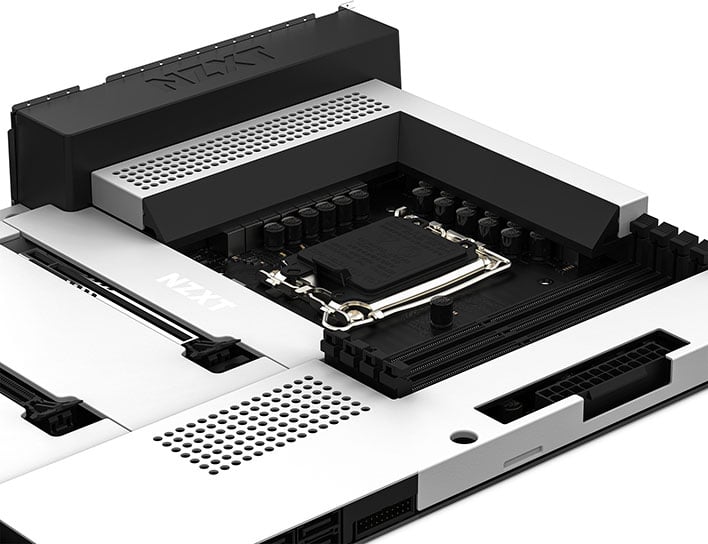 Good looks will only get you so far. Character counts too, and in that regard, you're looking at a motherboard with a 2-ounce copper PCB, and 16+1+2 DrMos power phase design. Additionally, an 8+4 pin ATX 12V power connector feeds power directly to the CPU, supplementing the main 24-pin ATX power connector. How it all olds up to overclocking remains to be seen, but the foundation looks solid.
Expansion duties are served by a full-length PCIe 5.0 x16 slot, two full-length PCIe 4.0 x16 slots, and two PCIe 3.0 x1 slot. The N7 Z790 also provides three M.2 slots that support PCIe 4.0 x4 NVMe solid state state drives (one of them also supports a SATA 6Gbps mode), four SATA 6Gbps ports with RAID support, and four DIMM slots supporting up to 128GB of DDR5 memory.

Wireless connectivity comes in the form of Wi-Fi 6E and Bluetooth 5.2 support. Users will also find a 2.5G LAN port on the rear I/O for wired duties, along with three USB 3.2 Gen 1 Type-A ports, two USB 3.2 Gen 2 Type-A ports, a USB 3.2 Gen 2x2 Type-C port, two USB 2.0 ports, various audio jacks (8-channel audio support), an HDMI output, and a button to clear the CMOS.
More connectivity options are available via internal headers, along with fan, pump, and RGB connectors. Overall it looks like a decent entry in the Z790 space, though we'd like to see a few more USB ports on the rear I/O.
NZXT says the N7 Z790 will be available in the fourth quarter for $299.99. For reference, Intel's Raptor Lake CPUs will release to retail on October 20.