A photo of a graphics card PCB with an NVIDIA AD103-301 GPU installed has been shared on a Chinese language tech forum. The image is clear enough to make out the GPU model number moderately easily and, if genuine, shows the PCB in a new breed of GeForce RTX 4080 graphics cards on the way from NVIDIA’s partners.

The GPU switcheroo, from the AD103-300 of the launch RTX 4080 version to the new AD103-301 delivers “no difference in performance,” according to the source. Instead, it is a background change for manufacturing purposes, with the largest benefit being a degree of enhanced stability.
The in-the-flesh images of this new Ada Lovelace GPU, flanked by 16GB of Micron GDDR6X, will come as no great surprise to ardent PC tech watchers. This weekend, we reported on this RTX 4080 build change (sans semiconductor imagery), as well as some leaked info about similar changes coming to the unlaunched RTX 4070.

Gainward has apparently confirmed the GPU updates to both RTX 4080 and 4070, as well as clarifying that performance specs such as GPU core configuration, clocks, and TDP will remain unchanged through the transition. There is no word about GPU changes coming to the GeForce RTX 4090 or RTX 4070 Ti models. 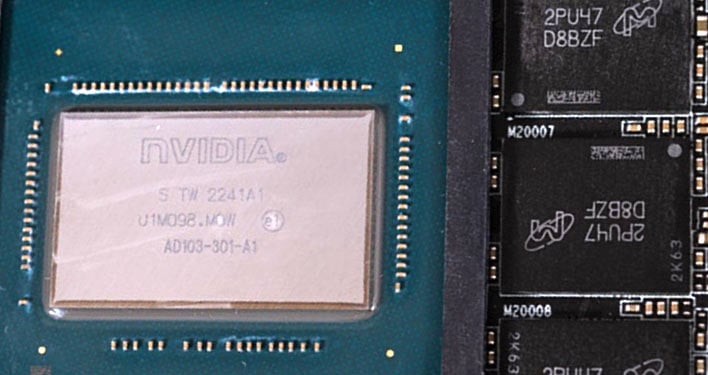 One of the reasons behind the GPU changes reported previously was to remove the need for a “comparator circuit” on the PCB, simplifying the build and possibly having a small impact on the bill-of-materials (BOM).

Today’s photo exposé of the AD103-301 GPU from ChipHell’s BadAssBot, provides the supplemental information that NVIDIA’s new GPU “enhances stability.” Stability improvements are highly worthwhile, even when for consumers “there is nothing else.”
We still wonder why it is worth deploying new silicon, from a commercial perspective, for little or no reduction in the BOM, and the touted but not clarified stability improvements.