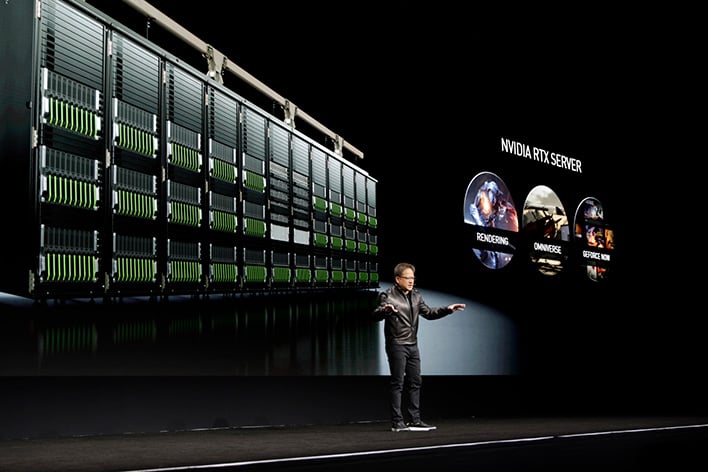 For over a decade, NVIDIA's bread and butter has been its gaming GPUs, and with another round of GeForce RTX graphics cards on the horizon rumored to bring massive improvements in both rasterized and ray-traced rendering, it did not seem like that would change. Well, it has. For the first time, NVIDIA's datacenter revenue is the company's top earning segment, ahead of its efforts in gaming.
NVIDIA posted record datacenter revenue of $1.75 billion for its second quarter of fiscal 2021, which represents an impressive 167 percent jump from a year earlier, and a 54 percent sequential jump. That accounted for the lion's share of its $3.87 billion in overall revenue, which is also a record, and up 50 percent from the same quarter a year ago.
This was an inevitable eventuality, given NVIDIA's savvy decision to branch out into other markets several years ago, including the datacenter and automotive sectors. NVIDIA's record datacenter revenue is also partly owed to the company's acquisition of Mellanox of $6.9 billion last year. Mellanox is a big player in the datacenter space, having pioneered the Infiniband interconnect technology that is commonly used in high performance computing (HPC) systems found in datacenters, and is a major supplier of end-to-end Ethernet solutions.
Gamers need not fret, though, because they contributed a significant amount to NVIDIA's bottom line, thus ensuring it will continue to crank out increasingly powerful GPUs for years to come. Specifically, gaming accounted for $1.65 billion in revenue for NVIDIA's most recent quarter, up 24 percent sequentially and 26 percent from last year. And that performance is based on moving more Turing parts, when everyone knows Ampere-based graphics card are right around the corner.
"Adoption of NVIDIA computing is accelerating, driving record revenue and exceptional growth," said Jensen Huang, founder and CEO of NVIDIA. "Growth in GeForce gaming accelerated as gamers increasingly immerse themselves in realistic virtual worlds created by NVIDIA RTX ray tracing and AI."
Looking ahead, NVIDIA could potentially see its gaming revenue retake the lead, depending on how its next-gen GPUs fare. Either way, the company is in excellent shape. It may also add ARM to the fold, if rumors of an acquisition turn out to be true, though NVIDIA would have to navigate regulatory hurdles if it makes a move like that.
Following the news, NVIDIA's share price is up a bit over 1 percent in early morning trading, giving it a market cap of $303.18 billion, making it the most valuable chipmaker in the US (again). For reference, Intel's market cap is currently at $208.86 billion, and AMD's is at $96.06 billion.