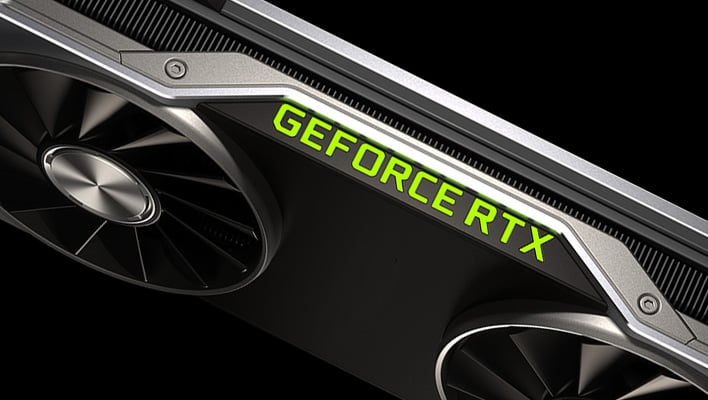 About all we really know about NVIDIA's next-gen graphics card plans is that it will be releasing...something, presumably based on its Ampere GPU. What exactly manifests is not public knowledge. Leaks and rumors abound, though, and one of the most recent bits of unofficial info has to do with pricing on the upcoming GeForce RTX 3090.
In addition to the usual disclaimer that is applied to leaks and rumors (always take this stuff with a grain of salt), it is worth noting that NVIDIA might end up with an entirely different naming scheme than what it has used in the past. That's to say, there might not be a GeForce RTX 3090—whatever part would fill that spot in the lineup could be called something else. Or not, as we just don't know.
Let's get on with it, shall we? Over at Chiphell (via TechPowerUp), a popular spot for supposedly leaked information, user wjm47196 claims the GeForce RTX 3090 model will start at $1,399, with a Founders Edition model running $100 more (so $1,499). The user also claims to have confirmed it will arrive with a heaping 24GB of GDDR6X memory.
To put that into perspective, it is a $400 markup over the launch price of the GeForce RTX 2080 Ti ($1,399 versus $999), or a $300 markup over the Founders Edition model ($1,499 versus $1,199). Here's a look back at launch pricing for NVIDIA's current-generation GeForce RTX cards based on Turing...
NVIDIA then followed suit with faster Super models...
Assuming the memory configuration is correct, the GeForce RTX 3090 will arrive with more than twice as much as the GeForce RTX 2080 Ti (24GB versus 11GB), and it will be the faster stuff to boot (GDDR6X versus GDDR6).
Another user on Chiphell (Alienxzy) also claims to have the inside scoop on a couple of custom variants, including Colorful's air-cooled Vulcan X OC for 13,999 Chinese Yuan (around $2,022 in USD) and hybrid-cooled Neptune for 12,999 Chinese Yuan (around $1,878 USD).
That is opposite of what we would expect—normally hybrid-cooled and liquid-cooled cards are more expensive than air-cooled cards, but perhaps the Vulcan X OC is actually more aggressively overclocked. Or maybe this is all nonsense. We will just have to wait and see.
Interestingly, Micron recently posted a tech brief suggesting the GeForce RTX 3090 will arrive with 12GB of GDDR6X memory, not 24GB. Rumors have been all over the map. It's also rumored that the GeForce RTX 3090 will arrive with 5,376 CUDA cores and a 384-bit memory bus, and will offer a tantalizing 50 percent performance bump over the GeForce RTX 2080 Ti. Wouldn't that be nice!