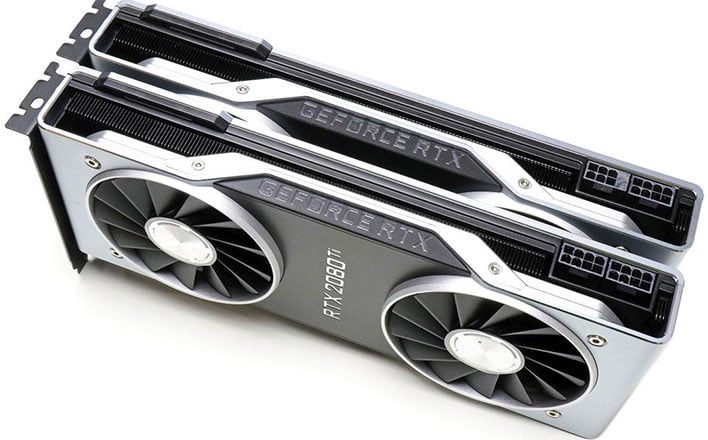 Turn out the lights, the party's over. The Turing GPU party, that is. Well, not officially, but you can assume the party is winding down to some degree, with NVIDIA getting ready to launch a new round of consumer graphics cards based on its Ampere GPU architecture. As it prepares for that day, rumor has it NVIDIA is discounting its GeForce RTX 2080 Ti and several other GeForce RTX 20-series graphics cards.
NVIDIA's 7nm Ampere GPU has already arrived, of course, though so far only in high performance computing (HPC) form. A consumer launch is still around the corner. Leading up to the launch, there has been an avalanche of leaks and rumors pointing to next-gen GeForce RTX 3000 series cards, including the GeForce RTX 3090, GeForce RTX 3080, and several others.
What's to become of the GeForce RTX 20 series? According to a Google-translated ITHome report, NVIDIA is in the process of stopping production and delisting several models, notably "all GeForce RTX 2070, RTX 2070 Super, RTX 2080 Super and RTX 2080 Ti."
Incidentally, the report does not mention the GeForce RTX 2060 and GeForce RTX 2060 Super or the regular GeForce RTX 2080, or any of the Turing-based GeForce GTX cards. We're not sure if that's because something got lost in translation or overlooked, or if NVIDIA plans to still make/sell/offer those models when Ampere arrives.
According to the report, this strategy will lead to a shortage of current models, and a subsequent price hike "mainly due to rising mining demand and insufficient chip supply." The former claim is dubious—cryptocurrency mining has mainly shifted over to specialized ASIC hardware, though we suppose if NVIDIA really has ended production, mining could still have a small impact on whatever inventory is left in the wild.
Whether the report is accurate or not, this is not a great time to buy a new graphics card, if you have the luxury of waiting. AMD and NVIDIA are both prepping a new round of graphics, based on RDNA 2 and Ampere, respectively. It's not often we advocate playing the waiting game—there's always something newer, faster, and shinier in the pipeline—but this is one of those times.
The exception would be if you spot a superb sale on a current-generation product. Otherwise, it's worth holding off until the new stuff arrives. Even if you don't plan to buy an RDNA 2 or Ampere graphics card, the upcoming launches could push down pricing on current-gen stuff, as vendors look to clear out their inventories to make room for the new stuff.