Back in November, we heard rumblings that NVIDIA was looking to give its GeForce RTX/GTX Mobile lineup a "Super" refresh; just as it had previously done with its desktop counterparts. Things have been quiet on that front until now, as we're seeing the first additional evidence confirming the existence of the GeForce RTX 2080 Super with Max-Q Design.

Confirmation of this news comes by way of TUM_APISAK, which unearthed a Geekbench entry for the mobile GeForce RTX 2080. In this particular instance, the GPU is paired up with an Intel Core i9-10980HK processor (Comet Lake-H), which indicates that is likely a desktop replacement gaming laptop. 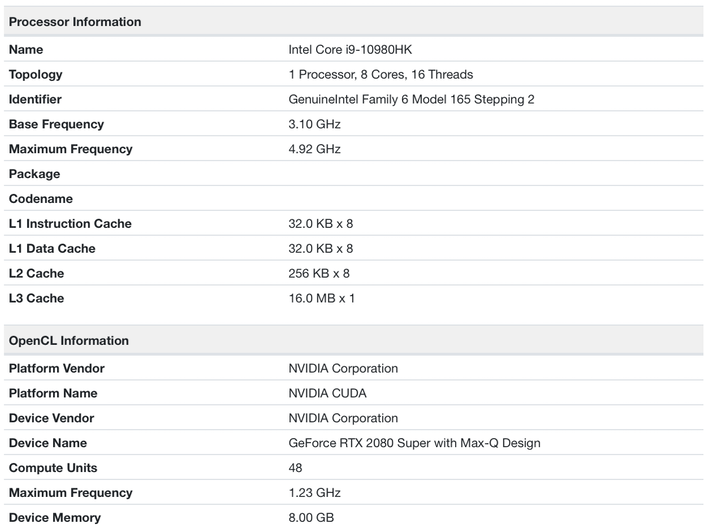 Intel announced its Comet Lake-H processors at CES 2020, and the Core i9-10980HK is an 8-core/16-thread part. According to Intel, these chips will have boost clocks in excess of 5GHz, but this particular example was clocked at 4.92GHz. According to a post to Twitter by Intel's Gregory Bryant, laptops featuring 10th generation Intel Core-H processors "will ship later this quarter", so that gives us a timeframe for when we should begin seeing laptops featuring GeForce RTX 2080 Super with Max-Q Design along with other members of the GeForce RTX/GTX Super family. 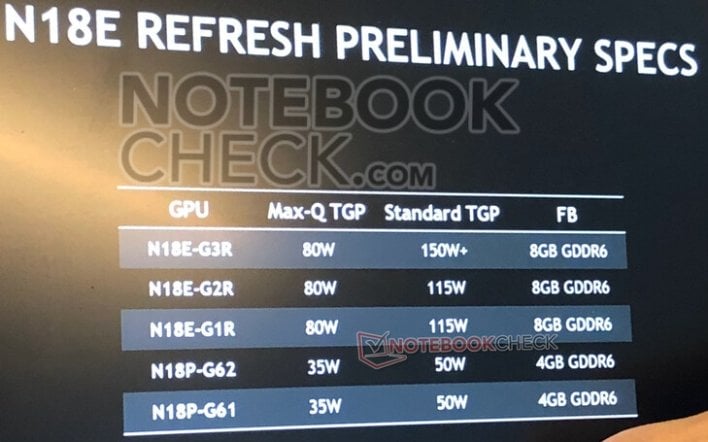 According to our previous reporting, this is what the GeForce RTX/GTX Super family will look like:

As you can see by the above specs, all of the cards will come equipped with GDDR6 memory, and all which feature higher clock speeds than their standard counterparts. It will be an interesting battle to see brewing in the mobile GPU realm. AMD has already announced its Radeon RX 5500M, and we'll be eager to see if the company has even more powerful variants on deck to counter NVIDIA’s offerings.