In case you have not heard, NVIDIA's DLSS (Deep Learning Super Sampling) technology is, quite literally, a game changer. NVIDIA really hit its stride with DLSS 2.0, which retained the same performance benefits of DLSS 1.0, but with much better image quality than what we saw out of the gate. Simply put, DLSS is pretty awesome. It's also now headed to virtual reality headsets.
The first VR titles to benefit from DLSS include No Man's Sky, Into The Radius, and Wrench. We're especially intrigued by the addition to No Man's Sky, which drops players into an infinite procedurally generated universe. Cranking the game's settings up can put a serious strain on your GPU, and according to NVIDIA, enabling DLSS will in VR will double the performance at the Ultra preset, maintaining 90 frames per second on an Oculus Quest 2 tethered to a PC with a GeForce RTX 3080 graphics card. 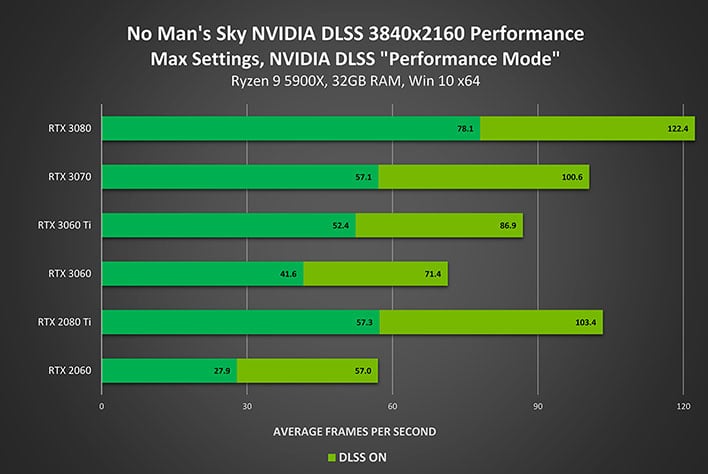 No Man's Sky is also getting DLSS for the desktop, and according to NVIDIA, users can expect up to a 70 percent performance improvement at 4K. A beefy system with a powerful GPU can expect to hit triple-digit framerates with DLSS turned on, according to NVIDIA's own benchmarking data, which shows a GeForce RTX 2080 Ti averaging 101.4 frames per second.
Also notable is the performance bump DLSS can provide on a mid-range graphics card like the GeForce RTX 2060. On that card, enabling DLSS in No Man's Sky could push performance from an uncomfortable 27.9 frames per second to almost 60 frames per second. And if you own a GeForce RTX 3060, DLSS can get you over the 60 frames per second hump at 4K. Not too shabby.
How does it look, thought? We have not tested it ourselves yet, but NVIDIA did upload a video showing a side-by-side comparison, and it is in line with what we have seen from enabling DLSS 2.0 in other titles...

It's nice to see NVIDIA and its partners work to make DLSS available in a wider range of games. Earlier this month, 4A Games added DLSS support to Metro Exodus Enhanced Edition, which is one of nine games to see the tech get infused this month (either already, or before the end of the month). Here's the full list...
There are now more than 50 games that support DLSS, and more are being added at a fairly steady clip. That said, it will be interesting to see how many VR titles get added in the coming months, now that the door has been opened.
In related news, NVIDIA has a new GPU driver available, version 466.47 (WHQL), which you'll need in order to properly enable DLSS in the aforementioned titles. It also brings 'Game Ready' status to Days Gone (meaning it's optimized to deliver the best performance in that game), which launched to PC today.
Happy gaming, folks.