The next-gen GPU wars have begun, and the battle will intensify when AMD's recently announced Radeon RX 6000 series lands at retail, alongside NVIDIA's GeForce RTX 30 series. Which will prove the victor? That remains to be seen. One thing that could possibly work in AMD's advantage is a feature called Smart Access Memory, or so the company would have you believe. Not to be outdone, however, NVIDIA has something similar possible and planned for Ampere.
Let's back up a moment. AMD is on cloud nine right now, having launched its Ryzen 5000 series CPUs and Radeon RX 6000 series GPUs. AMD Smart Access Memory (or ASAM) plays into the company's pitch that it is advantageous to build a PC entirely around its hardware ecosystem, as opposed to mixing Intel CPUs with AMD GPUs, or AMD CPUs with NVIDIA GPUs. How so?

ASAM enables a Ryzen 5000 series CPU to access the entire pool of memory attached to a Radeon RX 6000 series GPU over its PCI Express 4.0 interface. In the past, processors already had the ability to poke into a portion of GPU memory, but ASAM grants AMD's new chips access to all of it, which the company claims can improve performance by up to 11 percent in "select titles."
"In conventional Windows-based PC systems, processors can only access a fraction of graphics memory (VRAM) at once, limiting system performance. With AMD Smart Access Memory, the data channel gets expanded to harness the full potential of GPU memory, utilizing the bandwidth of PCI Express to remove the bottlenecks and increase performance," AMD says.
Here is a look at AMD's own testing data... 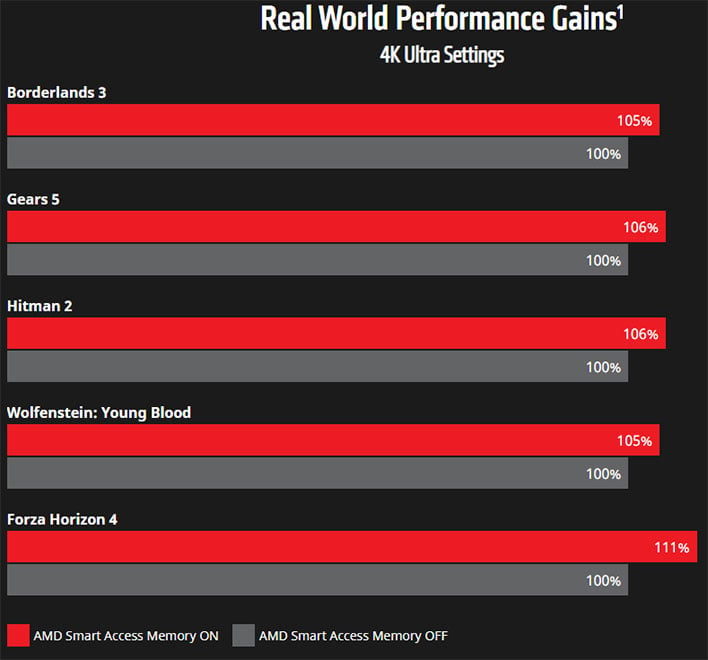 We'll have to see for ourselves when we evaluate AMD's new cards, but from the company's vantage point, there are tangible performance benefits to be had here. Whether these are cherry-picked benchmarks (probably) or not remains to be seen.
There is no such feature for NVIDIA's GeForce RTX 30 series, but apparently that is only because it has not been enabled yet. NVIDIA in fact reported to us that this functionality is part of the PCI Express specification (as opposed to being something unique and proprietary to AMD), and that it's possible with Ampere as well. Furthermore, NVIDIA plans to push out support to customers by way of a driver or firmware update (it's not clear which one).

"The capability for resizable BAR is part of the PCI Express spec. NVIDIA hardware supports this functionality and will enable it on Ampere GPUs through future software updates. We have it working internally and are seeing similar performance results," NVIDIA said.
Unlike AMD's implementation, NVIDIA apparently plans to have this working on both AMD and Intel systems, making it platform agnostic. It does not sound like this will be ready before the Radeon RX 6000 series launches to retail next week, but let's be real—all of these next-gen cards are in extremely short supply (compared to the demand for them anyway).
In any event, it will be interesting to see what actual impact this improved access to memory has on performance, and how AMD's and NVIDIA's implementations compare to one another. That is a question for another day.