No Man's Sky Joins Rare Company With Crossplay Support for PC, Xbox One And PS4

Making good on its promise, developer Hello Games is bringing No Man's Sky to Xbox Game Pass on Thursday, June 11. Same goes for a Windows 10 version, which will be part of the Game Pass for PC program starting on the same day. Good stuff, though even better, Hello Games also announced crossplay support for No Man's Sky.

"We are excited to be able to announce that, starting tomorrow [Thursday, June 11], PlayStation 4 players, Xbox One players, and PC players will all be able to explore, journey, survive, build, and trade together. Excitingly, No Man’s Sky is joining what is at the moment a fairly small group of games which support cross-platform multiplayer," Hello Games announced today.
It seems odd that in this era of gaming, cross platform gameplay is still very much the exception to the rule, but that is the case. Games like Fortnite and Minecraft support cross-platform play between PC and consoles, as do a few other titles. However, it is an incredibly short list, albeit is growing by one with No Man's Sky.
No easy task, implementing cross-platform support is a bit more involved than simply flipping a switch. In this case, Hello Games said it built an "entirely new networking architecture" to make it possible. 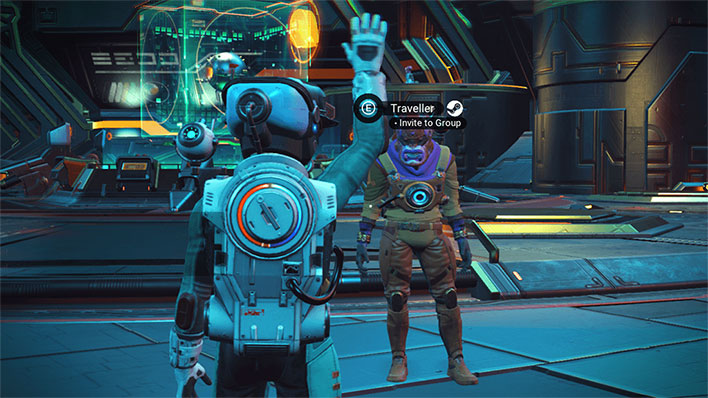 "A tremendous amount of work has gone into this update and the underlying technology and systems. We’ve moved to an entirely new networking architecture, with more flexibility for the future, allowing players to play together regardless of platform. I’m very proud of the team that has worked so hard to make this happen," Hello Games said.
According to the patch notes, players will be able to create cross-platform groups or join them in-game, or from the front-end. Platform icons will make it easy to see which system players are are using, for those who are curious to know.
Hello Games said it will continue working on new content updates, both "large and small for the future." What those entail remains to be seen.