Remember the skepticism surrounding Nintendo's strategy to release a hybrid console powered by an NVIDIA Tegra chip? I was among those who wondered if that was the right move. Not anymore, of course. We all now know the Switch is a huge success, and lest there remains any doubt, Nintendo has shipped over 103 million units of the comparatively underpowered console.
That puts it ahead of the Wii (101.63 million units), arguably the most venerable console in Nintendo's history, save for perhaps the original NES. There's a good chance the Switch will go on to become Nintendo's best-selling console of any kind, as it now only trails the DS (154.04 million units) and Game Boy (118.69 million units) in lifetime hardware shipments. As it stands, it's Nintendo's best-selling home console ever.
If we break down the updated numbers further, it means Nintendo shipped 10.67 million Switch consoles during the last quarter. That is more than twice as many as the PlayStation 5 (3.9 million units), though the silicon shortage could be hitting Sony (and Microsoft) harder than Nintendo. The PS5 costs more as well. 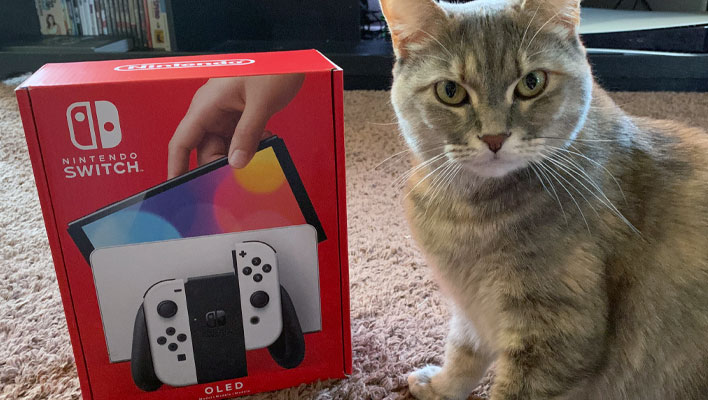 The Nintendo Switch OLED is the cat's meow

It will be interesting to see what lifetime sales of the Switch end up being when all is said and done. During an earnings call, Nintendo president Shuntaro Furukawa essentially indicated the Switch is still in its prime, suggesting it will buck past trends whereby console sales started to slow down at this point in their lifecycle.

"Switch is just in the middle of its lifecycle and the momentum going into this year is good. The Switch is ready to break a pattern of our past consoles that saw momentum weakening in their sixth year on the market and grow further," Furukawa said.
Hardware sales have translated into high software sales as well, with over 766 million software shipments to date. The best-selling first-party game to date for the Switch is Mario Kart Deluxe (43.35 million), followed by Animal Crossing: New Horizons (37.62 million), Super Smash Bros. Ultimate (27.4 million), and the launch title The Legend of Zelda: Breath of the Wild (25.8 million).