Have you ever wanted to take GTA V on the go? Well, this modder might just have a solution for you. While there have been mobile releases of games from the first installment in the Rockstar GTA series all the way to Liberty City Stories, the latest title, GTA V, still hasn’t seen a mobile or portable port. Well, with the exception of course being cloud game streaming services.

What if you want to go smaller than something like a mobile phone though? Like a 2.6-inch (66 mm) screen with a resolution of 160x144 pixels, and a whopping four colors?! You know, a Game Boy from 1989-1990. Well, Sebastian Staacks, a physicist and developer from Germany might just have your solution.

In a recent blog post and YouTube video, Sebastian goes into significant technical detail as to how he got this impressive feat of engineering to work, starting with taking advantage of a Wi-Fi cartridge he built himself to work with the classic handheld. He then goes into an explanation on how the actual Game Boy display palette works.

The Game Boy display actually operates on a tile-grid system and in a pretty interesting way the actual pixel values on the display are indexed tiles, as such the 160x144 pixels on a classic Game Boy only has about 360 pixels to display, however, graphical output data is only stored in a memory register of about 256 tiles. Sebastian goes on to say there is a tricky workaround. It involves changing a single bit in memory to allow a developer to house more display information in a secondary location, then in turn create a sort of overlap method where you have 256 tiles from one section of your original image, and 128 tiles from another section of your image. This leaves you with 384 tiles, which is well over the 360 pixels the display supports.

How does this mean you can play GTA V on a Game Boy? Well, this display method was the biggest step after making sure a solid Wi-Fi connection. As the developer shows, it’s really just streaming the video output from his Playstation and accepting input from the Game Boy controller. So really, we said “modder” at the opening of this article, but Sebastian technically did not modify his Game Boy in technical sense, but modified his homemade Wi-Fi cartridge in order to support the input and the display. This effectively enabled him to remote control his Playstation console to play GTA V on the device, so it’s not truly portable. In his video, though, Sebastion puts together some interesting math equating the amount of visual data being transferred to equate to about 168.75 KB/second, or about eight times the total data of a Game Boy Tetris cartridge (for reference). 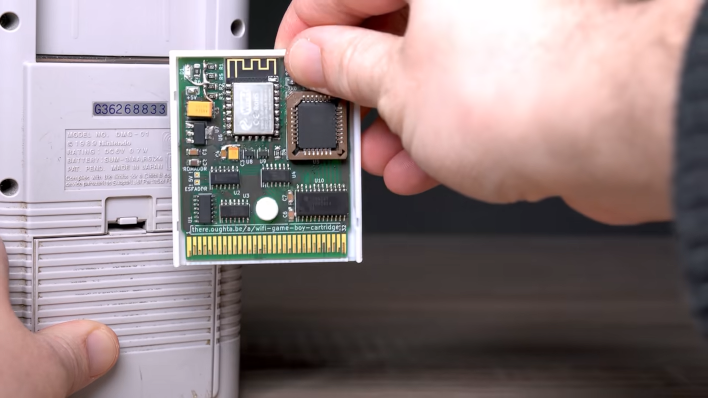 Retro hardware and modern gaming are quite a fun mix. In fact, we enjoy these so much we have a channel dedicated to each on our Discord. You can check out full details for this fun project on Sebastian Staack’s blog, there oughta be. Though he is far from the only developer or modder to bring games you don't expect to handhelds you didn't think you'd see them on—check out this modder who put Tomb Raider on a Game Boy Advance.